Although frames look intimidating on the surface, they really are simple to construct. In fact, one of the reasons for their overuse might be that when people find out how easy they are to create, they go “frame crazy” and use them all the time. However, frames are not an all-purpose site creation tool, but rather a means for creating dynamic layouts and efficient navigation systems.

What, exactly, are frames? Simply put, frames enable you to display more than one page at a time in the same window. Until now, when you have displayed your XHTML pages, you’ve done it one at a time. To display more than one document at a time, you would have to open multiple browser windows. Frames change all that. With a fairly simple set of elements, you can display two, four, eight, or even more pages in the same browser window. But why would you want to do this?

Say you are an author, and you want to put together a Web site to publicize your book. As you design the site, you decide that you want your book’s cover to appear on every page, but you’d like to include a lot of different content. Perhaps you want to put some reviews on one page, an excerpt on another, and reader comments on another, but you always want to keep your book’s cover in front of your potential customer.

You could design a site with tables, creating five or ten separate pages, each with the same layout but different content. Or you could construct a three-frame page that features the cover of your book and a banner with your name at the top, content on the right side, and a navigation bar on the left side. Then, when a visitor clicks a link in the navigation bar, only the content frame will change; everything else stays where it is. In this case, you have made your life easier by not creating the same layout ten times. You also have made things easier for your visitor because your pages will download more quickly. Remember, only the text content has to reload—not the images in the other frames. Less content equals faster load time.

Although frames provide for more efficient site design and navigation, they come with some noteworthy disadvantages attached. In fact, if you are not careful, you actually can make getting around your site more difficult. Consider some of the following ways in which frames can make site navigation confusing:

You might be wondering why you should even bother with frames. After all, there are plenty of other ways to present a Web site without using them. In fact, many excellent sites use no frames at all. So why use them?

There are any number of reasons you would want to use frames on your site. Frames can help you do things that would be difficult or impossible to do without them. For example, frames enable you to create some of the following effects:

To keep frames in perspective, remember that, although frames are useful tools, no tool is right for every task. If frames help you create a better site, by all means use them. But don’t load your site with frames just because you think they’re cool.

Like tables, HTML frames are very easy to build. As a matter of fact, they are so easy that you will wonder why you haven’t used them before now. In many ways, creating a site based on frames is easier than building it with tables. Although a frames-based site can become complicated, the basic concept is simple. First, you create the frames with a master document, called a frameset. This establishes the layout. Next you create standard a XHTML documents to fill the frames you’ve just designed.

Did You Know?—Who Developed the Idea of Frames?

Frames originally were developed by Netscape and first supported in Netscape 2. Later, they were made part of the HTML 4 standard. Virtually all new browsers support frames, but there are still some older browsers in use that do not.

You learned in Chapter 7 that XHTML has three Document Type Descriptions or DTDs: Transitional, Strict, and Frameset. In Chapter 8, you applied the Transitional DTD to your table-based layout. For your frames pages, you need to use the Frameset DTD. This means that the very first line of your HTML document (even before the opening <html> tag) needs to be a document type declaration, identifying the document as a frameset. This declaration should be typed in exactly as you see it in the following code listing:

Another unique part of the frameset is how the document is constructed. By now, you are accustomed to using the standard sequence of XHTML document elements:

The first step in learning how to work with frames is in understanding the elements used to create them. You need only two elements to create a page with frames: <frameset> and <frame />. The basic frame elements (and what they do) are listed here:

Although there are some other elements, and quite a few other attributes, that can be applied to frames, these are more for fine-tuning the frames and how they display and are covered later in this chapter. All you need for creating your first frames page are the elements and attributes we’ve covered so far.

The best way to learn HTML frames is by experimentation. By constructing a simple page with four frames, you will learn what you can do with them and how to modify them. For this example, you will start by creating some display documents.

Frames need something to display to work correctly. Before you begin constructing a frameset, you will want to create some simple HTML pages. For this example, these pages needn’t be complicated or filled with content. A plain page with the text “This is page 1” (or something equally simple) will suffice. Just for fun, you might want to specify a different background color for each of the pages.

To create a set of display documents, follow these steps:

The following code creates a black page with white text. Change the bgcolor and text values to create different combinations:

After you have some documents to display, it’s time to move on to the next step in making frames pages: constructing the frameset.

The heart of a frames page is the frameset. Think of it as a master document that controls the display of your frames. Although a frameset document is an HTML page in its own right, it displays no content of its own. The frameset’s contents are the frames. Keep in mind that when you are doing frames you must always have one extra document: the frameset.

You construct a frameset document the same way you do any other HTML page—with one important exception: A frameset page uses the <frameset> element in place of the <body> element. The reason for this is that your frames make up the body of the frameset document.

At its simplest, with no frames defined, a frameset will look like the following code listing. Using template.htm, create a frameset by replacing the <body> element with the <frameset> </frameset> element. Save it as framesample.htm.

However, if you try to display this, you won’t see much of anything because the frames have not yet been defined.

As mentioned earlier, you define frames using the cols=" " and rows=" " attributes. If you read Chapter 8, the idea of table columns and rows will be familiar. However, frames work a bit differently. You can have either columns or rows or a combination of both. For example, to construct a frameset with four equal columns, you would modify the opening <frameset> tag to read:

If you want instead to have a frameset with four equal rows, change to the rows attribute:

To divide your frameset into four equal parts with both columns and rows, you would modify the <frameset> tag to look like this:

If you add this code to your page and try to display it, you will still get a blank page. Why? Because defining a frameset is not enough. You also must specify what pages your different frames will load. For that, you use the <frame> </frame> element.

Your frames provide the content for your page. If you define frame structure in the <frameset> element but don’t tell the browser what to put into the frames, it will ignore the frameset altogether. Because the last example uses both rows and columns to construct four frames, you will use the <frame /> element four times.

For each <frame /> you create, you must also use the src attribute to tell the browser which file to load in that frame. For example, to use frame1.htm in one of your frames, you would include the following tag: <frame src="/books/4/238/1/html/2/frame1.htm" />.

Try including the preceding line plus three others in your frameset. Your complete frameset should look like the following code and illustration: 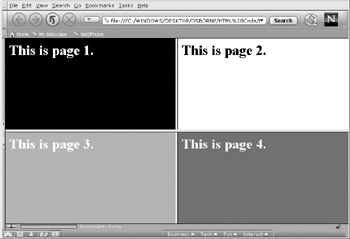 You can create even more complicated framesets by nesting them. Chapter 1 covers the concept of nesting, which means putting complete sets of tags inside one another. To nest frames, you will place another set of frameset tags inside your existing frameset. For example, consider the preceding frameset, which created four equal-sized frames. What if you decide to divide the bottom-right frame into two smaller frames? One way to do it would be to add another <frameset> in place of the <frame /> tag for that frame. Your code will be changed to look like this: 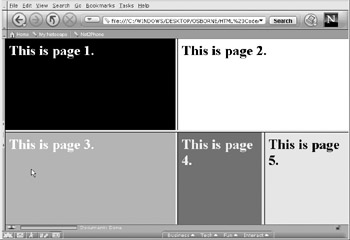 Although it is possible to come up with many different combinations of nested framesets, you might want to think twice about doing it. Nesting frames is one way to make your pages so complicated that you destroy their effectiveness. If you have a good reason to nest frames, by all means do it. Otherwise, let nested frames remain a curiosity, but not part of your regular Web arsenal.