There’s no better way to end the first chapter than to dive in and create a simple Hello World feature from the ground up. This exercise will step you through the fundamental aspects of creating, deploying, and testing a feature. To make things more interesting, at the end of this exercise, we will also add event handlers that will fire whenever the feature is activated and deactivated. The code inside these event handlers will use the WSS object model to change some characteristics of the target site.

Let’s start off by creating a new Class Library DLL project named HelloWorld. We are going to create a C# project in our example, but you can create a Visual Basic .NET project instead if you prefer. Eventually, we will add code that will be compiled into the output DLL for the feature’s event handlers. However, first we will get started by creating the feature.xml file.

Given the requirements of feature deployment, it makes sense to create a parallel hierarchy of folders within a Visual Studio project used to develop a WSS feature. This will make it easier to copy the feature files to the correct location and test them as you do your development work. Start by adding a folder named TEMPLATE to the root directory of the current project. Once you have created the TEMPLATE directory, create another directory inside that named FEATURES. Finally, create another directory inside the FEATURES directory using the same name as the name of the feature project. In this case the name of this directory is HelloWorld, as shown in Figure 1-12. 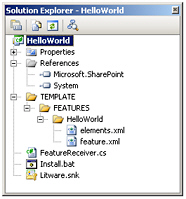 Figure 1-12: A Visual Studio project for developing a WSS feature

You see that a feature is defined using a Feature element containing attributes such as Id, Title, Description, Version, Scope, Hidden and ImageUrl. You must create a new GUID for the Id attribute so that your feature can be uniquely identified. You create the feature’s Title and Description attributes using user-friendly text. These attributes will be shown directly to the users on the WSS administrative pages used to activate and deactivate features.

As you can see, the Hidden attribute has a value of FALSE. This means that, once installed within the farm, our feature can be seen by users who might want to activate it. You can also create a feature where the Hidden attribute has a value of TRUE. This has the effect of hiding the feature in the list of available features shown to users. Hidden features must be activated from the command line, through custom code, or through an activation dependency with another feature. Activation dependencies will be discussed in more detail later in Chapter 9.

You will also notice that the ImageUrl attribute has a value that points to one of the graphic images that is part of the basic WSS installation. This image will be shown next to the feature in the user interface.

Inside the TEMPLATE directory there is a directory named XML that contains several XML schemas, including one named wss.xsd. If you associate this schema file with feature files such as feature.xml and elements.xml, Visual Studio will provide IntelliSense, which makes it much easier to author a custom feature. You may also copy these XSD files into C:\Program Files\Microsoft Visual Studio 8\Xml\Schemas\.

This CustomActions element has been designed to add a menu command to the Site Actions menu. It provides a user-friendly Title and Description as well as a URL that will be used to redirect the user when the Menu command is selected. While this example of a feature with a single element does not go very far into what can be done with features, it provides us with a simple starting point for going through the steps of installing and testing a feature.

Once you have added the install.bat file, you can configure Visual Studio to run it each time you rebuild the HelloWorld project by going to the Build Events tab within the Project Properties and adding the following post-build event command line instructions.

The first line with cd $(ProjectDir) is required to change the current directory to that of the project directory. The second line runs the batch file to copy the feature files to the correct location and install the feature with the InstallFeature operation of the command-line STSADM.EXE utility.

Once the feature has been properly installed, you should be able to activate it within the context of a site. Within the top-level site of the site collection you created earlier this chapter, navigate to the Site Settings page. In the Site Administration section, click the link with the title Site Features. This should take you to a page like the one shown in Figure 1-13. Note that if you are working within a farm that has MOSS installed, you will see many more features than if you are working within a farm with just WSS. 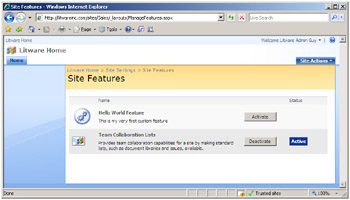 Figure 1-13: Once a feature is installed, it can be activated and deactivated by users.

You should be able to locate the HelloWorld feature on the Site Features page. You can then go through the act of clicking the button to activate the feature. Once you have done this, you should be able to drop down the Site Actions menu and see the custom menu item, as shown in Figure 1-14. If you select this custom menu item, you will be redirected to the URL that was defined by the Url attribute of the UrlAction element within the elements.xml file.

Figure 1-14: A CustomAction element can be used to add custom menu commands to the site actions menu.

You have now witnessed the fundamental principle behind features. Developers create various types of site elements that can be added or removed from a site through the process of activation and deactivation.

Adding an Event Handler to a Feature

Now it’s time to take the example of the HelloWorld feature a little further by adding event handlers and programming against the WSS object model. First, start by adding a project reference to Microsoft.SharePoint.dll. Next, locate the source file named Class1.cs and rename it to FeatureReceiver.cs. Next, add the following code.

The first thing you should notice is how you create an event handler that fires when a feature is activated or deactivated. You do this by creating a class that inherits from the SPFeatureReceiver class. As you can see, you handle events by overriding virtual methods in the base class such as FeatureActivated and FeatureDeactivating. There are also two other event handlers that fire when a feature is installed or uninstalled, but we are not going to use them in this introductory example.

Also note that this feature has been designed to store the original value of the site Title so that it can be restored whenever the feature is deactivated. This is accomplished by using a persistent property bag scoped to the site that is accessible through an SPWeb object’s Properties collection. Note that many of the objects in the WSS object model have a similar Properties property, which can be used to track name-value pairs using a persistent property bag. WSS handles persisting these named value pairs to the content database and retrieving them on demand.

Now that we have written the code for the feature’s two event handlers, it’s time to think about what’s required to deploy the HelloWorld.dll assembly. The first thing to consider is that this assembly DLL must be deployed in the Global Assembly Cache (GAC), which means you must add a key file to the project in order to sign the resulting output DLL during compilation with a strong name.

The next step is to update the feature.xml file with two new attributes so that WSS knows that there are event handlers that should be fired whenever the feature is activated or deactivated. This can be accomplished by adding the ReceiverAssembly attribute and the ReceiverClass attribute, as shown here.

Once you have made these changes to the feature.xml file, you should be able to test your work. When you rebuild the HelloWorld project, Visual Studio should run the install.bat file to copy the updated version of the feature.xml file to the WSS FEATURES directory and to install the updated version of feature.xml with WSS. The build process should also compile HelloWorld.dll with a strong name and install it in the GAC. Note that you will likely be required to run an IISRESET command to restart the IIS worker process. This is due to the fact that features and assemblies loaded from the GAC are cached by WSS within the IIS worker process.

If you have successfully completed these steps, you are well on your way to becoming an accomplished WSS developer. That’s because creating features and programming against the WSS object model are the two most basic skills you need to acquire.