Multi-Protocol Label Switching, or MPLS, is a technology designed to overcome the limitations of frame relay technology. To fully understand MPLS, you must understand a tiny bit about networking standards. The seven layer Open System Interconnection Reference Model (OSI model) is the networking standard that network engineers conform to when building networks. This model creates a unique division of labor both within and between each of the seven layers. Our discussion of MPLS only concerns the first three layers of the OSI model, sometimes called the lower layers. The upper layers of the OSI model aren’t covered in this book. If you’re interested in knowing how networks work, check out Networking For Dummies, 7th Edition, by Doug Lowe (Wiley).

The seven layers of the OSI model are numbered from bottom to top, so the lower layers are labeled like this:

Understanding why smarter is better

MPLS enables all the benefits of Layer 3 routing with the speed and security of Layer 2 switching. The flexibility of MPLS allows it to interact with and easily route data processed via Layer 2 and Layer 3 protocols.

The main benefit of having the Layer 2 protocols available with MPLS is that you can keep your existing equipment, which uses old protocols and transports data between sites with some of the more advanced routing capability available only via Internet Protocol. An MPLS VPN allows you to connect your company’s old frame relay switches together or use Ethernet to tie your new corporate e-mail server to T-1s at your remote office locations. The packets in your MPLS VPN can also be prioritized so that your VoIP packets are routed before the accounting file being sent to your boss. This capability to avoid congestion and prioritize the different forms of data you are transmitting, while still maintaining a high degree of security, makes MPLS a very attractive data transfer method.

Figure 14-5 shows a standard setup of an MPLS network. Although MPLS VPNs are different than basic IP, ATM, and frame relay networks, as a customer, you don’t need to deal with those issues. Your IT department can continue to refer to the different sites on your network via IP addresses if your organization had a standard IP network before. MPLS gives you the benefit of IP with the comfort of the network your IT department is used to. The interesting aspect to note is that there are no preset routes between any of the endpoints. Because MPLS functions at a network level, the routers within your carrier’s network can receive data packets and direct those packets along dynamic paths to their final destinations. 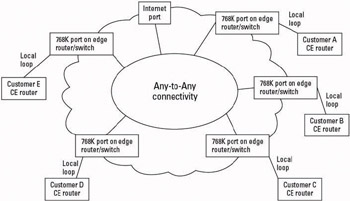 The Label Edge Router, or LER, is an important piece of hardware generally provided by your carrier, and is necessary to establish an MPLS network. The LER typically sits on the edge of your carrier’s network. Your router is connected to the local loop that connects to the LER at your carrier. The main job of the LER is to assign a label to every packet of data sent through the MPLS network. This label determines the packet’s routing process and priority.

The following sections explain the materials you need to have in place to get your MPLS configuration off the ground.

Just like any dedicated service, you need to rent the copper wires or fiberoptic cable (depending on the size of circuit you require) from your office to the nearest MPLS entry point for your carrier. The local loop’s cost is similar to that of a voice circuit of the same bandwidth, with the price increasing as the distance grows.

Your carrier’s Label Edge Router (LER) sits on the other side of your local loop to receive your data. As the carrier’s LER receives each packet, it reads its label and routes it accordingly. You have to pay for a port into the carrier’s LER based on your required bandwidth.

The last item you have to pay your MPLS carrier for is the bandwidth required to send data. Carriers charge for bandwidth in a variety of ways, so speak to your carrier to decide what is the best billing choice for your specific application.

Researching MPLS on the Web

Tip  If you are interested in finding out more about MPLS before you call your network technician to talk over the project, you can tap the following Web resources for general information: