Cisco's intrusion protection solution uses advanced technology to adapt to changing network threats, both known and unknown, and to ensure the resiliency of mission-critical systems and applications. We now discuss the functions and features that make this possible.

A complete IDS incorporates the detection of attacks to network systems and hosts , prevention against the detected attacks, and a reaction to immunize the network from malicious sources. Cisco's IDS portfolio, which allows an organization to implement and manage its own active defense system, consists of the following components :

Cisco's Threat Response investigates attacks and their potential damage to a network. This way, security staff aren't forced to manually investigate attacks that wouldn't cause any harm to the target system or host. When Cisco Threat Response receives an attack alert, it launches an in-depth analysis examining operating system and device vulnerabilities, registry entries, and system and log files such as service packs . If the investigation shows that the attack is harmful to the target host, forensic evidence is collected and stored offline for further analysis.

You can install HIPS agent software on public servers, corporate mail, and application servers as well as on individual hosts. The agent software performs intrusion detection analysis to protect its specific host.

Using NIDS involves the deployment of hardware sensor monitoring devices throughout the network to capture and monitor network traffic as it traverses network media. In contrast to HIPS, which uses software agents installed on individual hosts, a single NIDS sensor can protect multiple hosts, allowing for protection as the network grows.

The CSA MC installation automatically builds agent kits so that you can deploy agents to servers and workstations without logging into the MC. You can deploy these kits on up to 5,000 agent hosts with user logon scripts, automatic software deployment products, email distribution of Web links to the agent kits, or software image replication.

The Router Sensor IOS IDS is designed for lower-risk environments, with a subset of 100 of the sensor appliance IDS signature series. IOS IDS is supported on IOS software version 12.0(5)T and above; on router platforms 830, 1700, 2600, 3600, 7100, 7200, and 7500; as well as on the Catalyst 5000 Route Switch Module (RSM). IOS IDS can report logging to a syslog server or another device that supports the PostOffice communications protocol. When detecting an attack, IOS IDS drops the offending packet to terminate the TCP session.

The Firewall Sensor PIX IDS is similarly designed for lower-risk environments, with a subset of 57 of the sensor appliance IDS signature series. PIX IDS is supported on PIX version 5.2 and above and on the 501, 506E, 515E, 525, and 535 models. PIX IDS sends reports to a syslog server and executes a drop and reset when detecting an attack.

The version 4 4200 series of sensor appliances includes the 4215, 4235, 4250, 4250XL, and the IDS Module 2 (IDSM2) IDS module for the Catalyst 6500 family series of switches. The core function of the appliance solution is to protect network devices, services, and applications.

The comprehensive signature set detects network, application, reconnaissance, DoS, and fragmentation attacks, as well as anti-IDS evasive techniques such as obfuscation. The sensor appliance series can respond to an attack by resetting the TCP session, creating an IP log session file, or instructing another device such as a router or firewall to block the connection.

Switch Sensor IDS Module for the Catalyst 6500 Family of Switches

The IDSM2 extends the specifications of its predecessor, the IDSM, as shown in Table 3.1.

Now that we've reviewed Cisco's IDS product portfolio, including both host-based and network-based solutions, we need to consider their management and overall deployment. Management and monitoring are performed by various products and services, depending on the scale of the agent and sensor deployment.

Cisco's IDM is a Web-based graphical user interface (GUI) designed to manage a single sensor device, and it is installed on all sensors by default. Because it only manages the sensor on which it is installed, IDM is appropriate only for small-scale sensor deployments where the installation, configuration, and management of individual devices remain efficient.

Figure 3.2 shows the Network Settings page of the IDM. 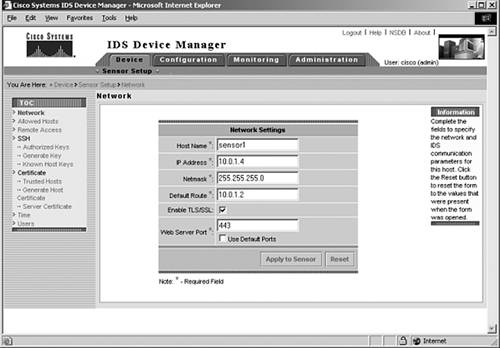 Also designed for small-scale sensor deployments, Cisco's IEV is a GUI capable of managing event monitoring for up to five sensors.


IEV includes the Cisco Network Security Database, which provides detailed signature and vulnerability information and is a component of IEV. The online version of the NSDB, Cisco Secure Encyclopedia (CSEC), is available with a Cisco Connection Online (CCO) account. You can download IEV can from http://www.cisco.com, and it runs on Windows NT or 2000. IEV is covered in greater depth in Chapter 13, "Monitor a Cisco IDS Protection Solution for Small and Medium Networks Using Cisco IDM and Cisco IEV." Figure 3.3 shows the Network Security Database page in IEV. 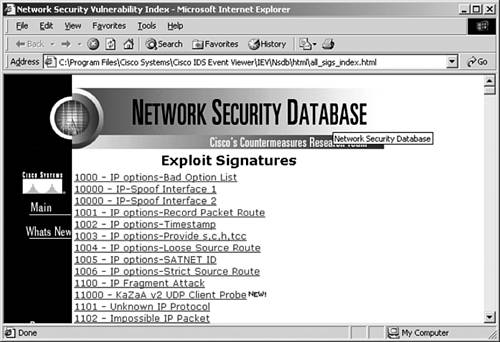 The Management Center for IDS sensors supports the initialization, installation, configuration, and management of an enterprise-scale deployment of IDS sensor appliances.

Figure 3.4. The Cisco Management Center within the Cisco VMS. 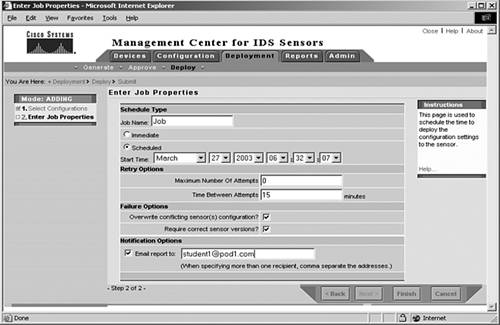