Protecting Your Network with Firewalls

What is a firewall? In the non-computer world, a firewall is a physical barrier that keeps a fire from spreading. Computer firewalls serve a similar purpose, but the “fires” that they attempt to block are attacks from crackers on the Internet. In this context, a firewall, also known as a packet filter, is a physical piece of computer hardware that sits between your network and the Internet, regulating and controlling the flow of information.

If you currently use ipchains on your Red Hat Linux system (for example, if you just upgraded to Fedora Core 2) and you want to convert to iptables, you need to disable ipchains before you can use iptables. In fact, if you try to use the iptables script (/etc/init.d/iptables) to start iptables while the ipchains module is loaded, the iptables startup script silently fails and exits.

This section describes how to turn on iptables and set up firewall rules for several different types of situations. It also tells how to turn on features related to firewalls that allow your iptables firewall to do Network Address Translation (NAT), IP masquerading, port forwarding, and transparent proxies.

The following procedure describes how to get iptables going on your Fedora system.

If your iptables service didn’t start, make sure that:

One way to configure iptables is to start by adding and deleting rules to your kernel from the command line. Then when you get a set of rules that you like, you save the rules that are currently running on your system. The tools you use to create your firewall rules and then make them permanent are as follows:

To get you started with iptables, I’m providing a sample set of iptables rules along with descriptions of how you might change those rules for different situations. Here’s how you could load and save any of the sets of rules described in the following example:

From now on the rules will be read each time you reboot or restart iptables. Save a copy of the script you used to create the rules, in case you ever need it again.

Because firewall configurations can be vastly different, depending on what you are trying to achieve, I've illustrated how to configure firewalls based on several different example setups. These setups combine different levels of security requirements.

This example features a home or small-office LAN with a Fedora system acting as an iptables firewall between the LAN and the Internet. The firewall computer also acts as a Web server, FTP server, and DNS server. Figure 14-1 shows this configuration. 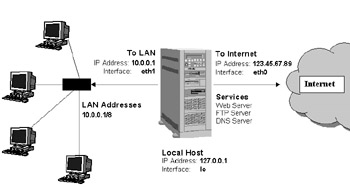 Figure 14-1:   Using iptables as a firewall between the Internet and a LAN.

If you want to use the sample firewall script that follows, you must change the following information to match your configuration:

Here is an example of a script to load firewall rules that could be used for the configuration shown in Figure 14-1:

I divided the commands in the preceding script into six sections. The following text describes each of those sections.

In this scenario, the firewall is protecting a Linux system (firewall) and several systems on the LAN that only want to connect to the Internet. No servers are behind this firewall, so you want to prevent people from the Internet from requesting services.

You could use the same script shown in Example 1, but not use lines that request TCP services. So you could drop the user-defined chain in section 2 and drop the TCP rules from section 3. You could also remove the ICMP rules, if you don’t want your firewall to be visible to ping requests (Type 8) and if you don’t care about receiving messages when your packets exceed their time to live values (Type 11), such as when a packet runs into a broken router.

In this example, there is one network interface, connecting your Fedora system to the Internet. You are not sharing that connection with other computers and you are not offering any services from your computer.

Now that you’ve seen something about what iptables rules look like and how you can get them going, step back a bit and see how iptables works.

The iptables feature works by having IP packets (that is, network data) that enter or leave the firewall computer, traverse a set of chains that define what is done with the packet. Each rule that you add essentially does both of the following:

Different sets of rules are implemented for different types of tables. For example, tables exist for filtering (filter), network address translation (nat), and changing packet headers (mangle). Depending on the packet’s source and destination, it traverses different chains. Most of the rules you create will relate to the filter table (which is implied if no other table is given).

The chains associated with the filter table are INPUT, OUTPUT, and FORWARD. You can add user-defined chains as well. You will probably be most interested in adding or removing particular TCP and UDP services using the basic rules shown in the previous example. Assign ACCEPT to packets you want to go through and DROP to those you want to discard. You can also assign REJECT to drop a packet but return a message to the sender, or LOG to neither drop nor accept the message, but to log information about the packet.

A lot of great features are built into iptables. The following descriptions tell you about some cool things you can do with iptables and give you some tips on using it.

Allowing FTP and IRC services through an iptables firewall

With passive FTP, the FTP client sends its IP address and the port number on which it will listen for data to the server. If that client is on a computer that is behind your firewall, for which you are doing NAT, that information must be translated as well or the FTP server will not be able to communicate with the client.

iptables uses connection-tracking modules to track connections. Using this feature, it can look inside the FTP data themselves (that is, not in the IP packet header), to get the information it needs to do NAT (remember that computers from the Internet can’t talk directly to your private IP addresses). To do FTP connection tracking (to allow passive FTP connections to the clients on your LAN), you need to have the following modules loaded:

The same is true for chats (IRC) and DCC sends. Addresses and port numbers are stored within the IRC protocol packets, so those packets must be translated too. To allow clients on your LAN to use IRC services, you need to load the following modules:

The default port for IRC connections is 6667. If you don’t want to use the default you can add different port numbers when you load the connection-tracking modules:

Using iptables to do NAT or IP Masquerading

As noted in the iptables example, you can use Source Network Address Translation (SNAT) or IP Masquerading (MASQUERADE) to allow computers on your LAN with private IP addresses to access the Internet through your iptables firewall. Choose SNAT if you have a static IP address for your Internet connection and MASQUERADE if the IP address is assigned dynamically.

Here is an example of a SNAT rule:

Remember that you need to make sure that IP forwarding is turned on in the kernel. (It is off by default.) To turn it on permanently, edit the /etc/sysctl.conf file as described earlier. To turn it on temporarily, you can do the following:

If you require dynamic IP addressing (in cases such as a dial-out link where you don't know the IP address when you first establish the connection to the Internet), turn on that service:

Using iptables as a transparent proxy

With the REDIRECT target you can cause traffic for a specific port on the firewall computer to be directed to a different one. Using this feature you can direct host computers on your local LAN to a proxy service on your firewall computer without those hosts knowing it.

The following is an example of a set of command-line options to the iptables command that causes a request for Web service (port 80) to be directed to a proxy service (port 3128):

You can only use REDIRECT targets in PREROUTING and OUTPUT chains within a nat table. You can also give a range of port numbers to spread the redirection across multiple port numbers.

Using iptables to do port forwarding

What if you have only one static IP address, but you want to use a computer other than your firewall computer to provide Web, FTP, DNS, or some other service? You can use the Destination Network Address Translation (DNAT) feature to direct traffic for a particular port on your firewall to another computer.

(Note that the preceding example should actually appear on one line. The backslash indicates continuation on the next line.)

You can also spread the load for the service you are forwarding by providing a range of IP addresses (for example, --to-destination 10.0.0.1-10.0.0.25). Likewise, you can direct the request to a range of ports as well.

Using the LOG target you can log information about packets that meet the criteria you choose. In particular you might want to use this feature to log packets that seem like they might be improper in some way. In other words, if you don’t want to drop a packet for some reason, you can just log its activity and decide later if something needs to be corrected.

The LOG target directs log information to the standard tools used to do logging in Fedora: dmesg and syslogd. Here’s an example of a rule using a LOG target:

Instead of info, you could use any of the following log levels available with syslog: emerg, alert, crit, err, warning, notice, info, or debug. Using the --log-prefix option as follows, you could also add information to the front of all messages produced from this logging action:

You can modify or expand on the iptables examples given in this chapter in many ways. iptables is tremendously flexible.

When you actually create your own iptables firewall, you should refer to the iptables man page (type man iptables) for detailed descriptions of options, ways of matching, ways of entering addresses, and other details. I also recommend an excellent iptables Tutorial by Oskar Andreasson (http://iptables-tutorial.frozentux.net).

Here are a few tips for using iptables features: