Figure 10-3 illustrates the structure of the Event Monitor pattern. Event monitors are rarely generic enough to service any business object, business object collection, or business process. Instead, you create as much isolation as possible by creating an information snapshot that is replaceable at compile time. By doing so you can change quickly to service other targets or facilitate more rapid change if you become interested in different data. 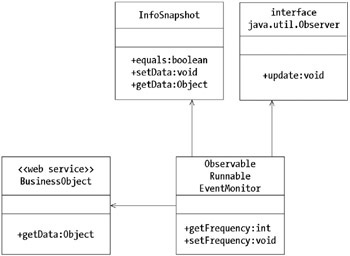 Unfortunately, without the participation of the component designer for the target object ”in this case, the target Web Service (the business object, collection, or process) ”a high amount of customization goes into creating each event monitor. Companies that eliminate and ease the burden of creating customized event monitors make substantial profit from their tools. Typically, the event monitor is part of an end-to-end solution for integrating two applications, but event monitoring certainly is useful beyond this relatively limited tool domain. An example is a monitoring framework that scrutinizes device status. It is highly unlikely that hardware devices expose events for the exact needs of your software, especially in the event that the hardware device goes offline. For this scenario, an event monitor fits your needs to determine when a particular device goes offline.

Understanding the Components of an Event Monitor

The Event Monitor pattern employs several components spread across processes and physical computer systems. On one system, the target of the event monitor makes important information available that clients must monitor. The event monitor, residing in another process space, uses a proxy (in this case, an architecture adapter) to the target for contacting and retrieving information. The following interfaces and classes are typical in an event monitoring scenario:

InfoSnapshot: The InfoSnapshot class encapsulates the exact changes that a particular event monitor is looking for in a data set made available from the business object. An information snapshot is highly dependent and tightly coupled to the event monitor; however, it does slightly partition responsibilities to allow easier modification of the application. Because of this separation of code, the author of an EventMonitor class can just worry about interacting with and gathering data, and the logic for determining interesting changes can be programmed and changed separately.

Collaborations between the involved components are relatively straight-forward. The EventMonitor class uses custom logic to interact with the BusinessObject Web Service or another basic object or process pattern. This interaction connects to the target business object and retrieves all of the necessary information to determine if a useful event occurred in the business object. The EventMonitor class takes the new information and gives it to the information snapshot that encapsulates the actual comparison logic. This separation of responsibility simplifies the coding of the event monitor and can help extend the event monitor to allow different policies for determining when an event occurred. 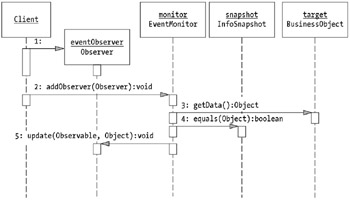