This book, to a great degree, is about the differences between SAN and NAS architectures, technologies, and solutions. Looking at SAN and NAS products as an integrated solution within the data center, we must view both the differences and similarities from a different perspective-that is, how do we put such solutions together to provide value in the data center. Moreover, what are the applications and, more specifically , I/O workloads that would benefit from both technologies?

The most visible difference is the method in which SAN and NAS process an application's request for data. This represents the block I/O versus the file I/O orientation of each solution.

SANs provide a storage interconnection that enables an attached server to process an I/O as if it were communicating with a direct attached storage device. This allows the attached server's OS to execute a block I/O even though the operation is transported over the FC protocol within the storage network. Consequently, SANs enjoy the benefits and efficiencies of block I/O while enabling the flexibility and added bandwidth performance of being on a network.

Figure 20-1 contrasts these differences to show SAN I/O as an intra system transaction and the NAS I/O as an inter system transaction. The SAN block I/O requires direct communication with the initiating operating system. The NAS file I/O does not require direct communications with the initiating operating system, but must communicate with another operating system where it obtains only the file attributes. Having accepted that information from the initiating OS, the NAS OS executes a block I/O on their behalf . When viewed from an application standpoint, the application program does not care where the data is, as long as there is some level of addressability to locate and read or write the data. The internals of that operation, which are a block I/O, are handled by the NAS OS where the data actually resides. 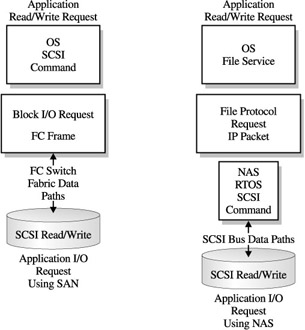 The other visible difference is the network where each solution resides. NAS uses existing Ethernet topologies and the TCP/IP-layered network software model, rendering it an IP-based storage transport. SAN, on the other hand, uses the Fibre Channel-layered network software model across a variety of media transports. Nevertheless, it remains a closed system that requires some method of translation to participate in other networks.

The differences of data encapsulation, speed, and reliability between transport protocols of TCP/IP and FC illustrate the challenges of integrating IP-based networks with FC-based networks. TCP/IP based upon data communications architectures is not well suited to the transmission of a native I/O, as indicated in Figure 20-2. The size of IP packets limits its value in the types of I/O workloads it can handle. Enhanced only through the increased media speeds, the limitations of TCP/IP for storage equate to many of the limitations of NAS products. However, the ability to leverage the wide area network capability of TCP/IP networks can provide access to remote storage locations. 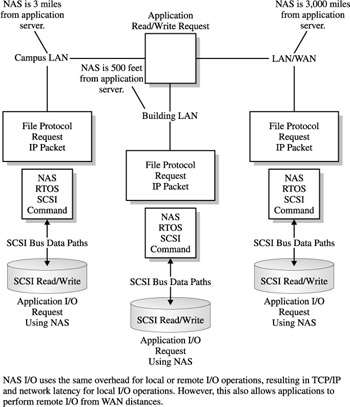 A SAN's use of FC provides the basis for a channel-oriented architecture that facilitates its use as a storage transport (shown in 20-3). The FC classes of service provide the levels of reliability to perform in environments where data integrity is important (for example, most commercial data centers). The frame architecture of approximately 2KB and its transfer rate of 1 Gbps moving to 2 Gbps and beyond extends FC's ability to handle a larger set of I/O workloads. The FC protocol functions as a transport for block I/O within the limitations of SAN networks. The issue with FC SANs is its limitation in providing wide area network usage when accessing remote storage locations. 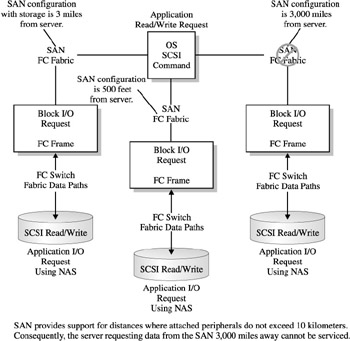