Results of Upsizing the IceCream Database

This database upsizes fairly well. All the database tables and table fields upsize with no problems. However, there are one or two areas where you will have to manually recreate some objects. The following queries must be recreated manually. Note that the upsizing report will also show you the T-SQL that was attempted, which serves as a great start when repairing the damage. 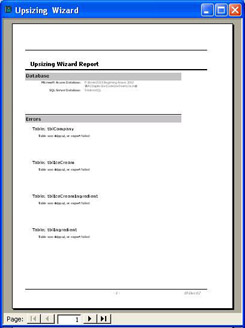 The upsizing report provides you with much needed information about the entire process. All of the options you have chosen are displayed in the report. In addition, the following information is provided:

The upsizing report is a valuable tool which can assist you in tracking down problems with objects that fail to upsize.

The following table lists the Query Objects in the original Microsoft Access database and the resulting SQL Server objects. We also show those objects that were not upsized.

As you can see we have a wide mixture of SQL Server objects to deal with, many of which may be new to you. The next section looks at each of the above objects and provides you with the opportunity to actually create them using the Access interface.