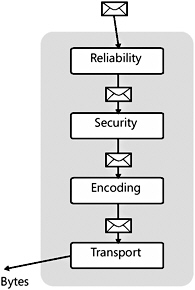 Factory objects instantiate channel objects. In most cases, there is a one-to-one correlation between factory objects and channel objects. In other words, each channel type has a corresponding factory type. Just as there is no one-size-fits-all channel type, there is no one-size-fitsall factory type. Because channels are frequently arranged in a stack at run time, the factory objects that create the channel stack are also frequently arranged in a stack. In one sense, the arrangement of factory objects in the factory object stack dictates the arrangement of the channels in the channel stack. You’ll learn more about the channel factory members in Chapter 7, “Channel Managers.” For now, it is enough to know that channels are not directly instantiated by user code, but rather through a channel factory.