Getting Started with Driver Development

To follow the examples in this book and to use the WDF frameworks, you must install the current Windows Driver Kit (WDK). The WDK contains most of the resources you need to develop drivers, such as tools, documentation, and libraries. The following sections provide some guidelines and tips for installing software and finding the samples and tools discussed in this book.

However, you should plan to install, test, and debug your driver on a system that is running the target version of Windows, with hardware that is the same as or similar to the hardware on your customers' systems.

To debug UMDF drivers, you can run the debugger and driver on the same computer or run the two on separate systems. You can also use a single computer with different versions of Windows on separate partitions for many of these tasks. However, a common practice is to have a development computer plus at least one additional computer dedicated to testing and debugging.

We recommend the following hardware for a developer's work configuration:

How to Obtain and Install the WDK

The WDK, which contains the Driver Development Kit (DDK), is the driver developer's primary resource. The WDK contains the bulk of what you need to develop drivers, as described in the following sections.

The WDK supports driver development for the Microsoft Windows NT family of operating systems, starting with Windows 2000. The WDK is released periodically, and the version is typically associated with a particular Windows release. However, that's just a convenient way of indicating the release date. In fact, each WDK release supports building drivers for all hardware platforms and all versions of Windows that Microsoft supports under the life cycle support policy. In 2007, the WDK supports building drivers for Windows 2000, Windows XP, Windows Server 2003, Windows Vista, and Windows Server "Longhorn."

You should always use the latest version of the WDK. This practice guarantees that you have current documentation and tools, including all updates and fixes made since the previous release.

To Obtain the WDK

To Install the WDK

The WDK includes static libraries (LIBs), dynamic-link libraries (DLLs), and the WDF libraries that you need for developing WDF drivers:

To Run the WDK Documentation from the Start Menu

The WDK contains a substantial set of tools for development and testing. Most are command-line tools that run in a command window, but some are conventional Windows applications with graphical user interfaces. Some tools for testing include the following:

Note-Info  To run some of the tools in Windows Vista, you must specify that you want the tool to run with elevated privileges, even if you already have administrative privileges. See "User Account Control" on MSDN for details-online at http://go.microsoft.com/fwlink/?LinkId=80621.

To Run an Application on Windows Vista with Elevated Privileges

To Open a Command Window with Elevated Privileges

The WDK includes an extensive set of samples that show common types of drivers you might develop. These samples contain well-designed working code and are extensively commented.

If you are a new WDF developer, we recommend that you examine the Skeleton and Fx2_Driver samples, which are used throughout this book:

The WDK provides many KMDF samples. If you are a new WDF developer, we recommend that you examine the Toaster and Osrusbfx2 samples, which are used throughout this book. You can examine other samples for more information about other features that these samples do not use, such as DMA or interrupt handling:

How to Obtain Checked Builds of Windows

The system Microsoft uses to build Windows produces two separate builds of the operating system: free and checked. We recommend that you test and debug on both types of builds:

Info  You can obtain checked builds on MSDN Subscriber CDs or from the Subscription area on MSDN. See "Using Checked Builds of Windows" on the WHDC Web site-online at http://go.microsoft.com/fwlink/?LinkId=79304.

How to Obtain Debugging Tools

The Debugging Tools for Windows package is provided at no charge on the WHDC Web site and is included in the WDK.

To Obtain Debugging Tools for Windows from WHDC

Tip  Check the Debugging Tools for Windows documentation for information about where the package is installed.

The Debugging Tools for Windows package includes the following components:

When debugging a driver-especially a kernel-mode driver-you typically need the symbol files for the version of Windows under which the driver is running. Symbol files for all versions of Windows are available from Microsoft.com. For kernel debugging, you must install the symbols on the computer that hosts the debugger, not on the test computer.

To obtain up-to-date symbols, we recommend that you connect the debugger to the Microsoft symbols server, which automatically downloads the correct symbols.

Chapter 22, "How to Debug WDF Drivers," discusses how to use symbols when debugging a driver, including how to use the Microsoft symbols server.

Info  See "Debugging Tools and Symbols-Resources" on the WHDC Web site for a list of training companies and other resources for learning about debugging Windows drivers-online at http://go.microsoft.com/fwlink/?LinkId=79332.

How to Obtain OSR Learning Devices

The best way to learn how to develop device drivers is with an actual device. However, commercial devices are frequently complex, making it difficult to get started. In addition, the specifications you need to implement such a driver are often proprietary and can be difficult to obtain if you do not work for the manufacturer.

To solve this problem for beginning driver developers, OSR has created several learning kits with devices that are specifically designed for learning driver development. They are simple enough that you can focus on developing basic skills.

Physically, the kits are circuit boards that either plug in to the PCI bus or attach to the computer with a USB cable. The boards provide visual feedback on their operation, so that you can easily see what is happening. For example, the USB device has an LED panel that can be programmed to display alphanumeric characters, as shown in Figure 1-1. This book uses Microsoft sample drivers that work with the OSR USB Fx2 device. 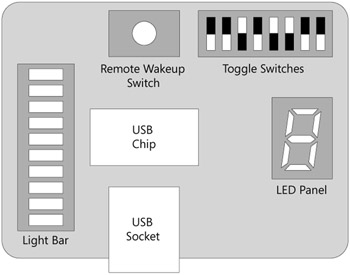 Info  The OSR Learning Kits include all of the required hardware specifications to implement a driver, plus sample code and test applications. See the OSR Web site for more information and to obtain kits-online at http://www.osronline.com.