One observable trend in the wide area wireless industry is consolidation. In order to remain viable, many network operators are purchasing or partnering with companies that offer complementary technology. This makes it very difficult to maintain an accurate list of the WWAN operators. For this reason, in Table 3.4, rather than attempting to provide an exhaustive list of the wireless operators, we list information and URLs for the organizations that oversee the network protocols. These Web sites will have the most up-to-date information on the carriers in each region for their respective protocols. Additionally, these sites serve as a good resource for information on these operators' respective technologies.

Criteria for Selecting a WWAN Operator

There are literally hundreds of WWAN operators worldwide, each of which supports at least one of the network protocols covered in this chapter. If you are investigating a wireless provider for your organization, the following are the leading characteristics that you will want to consider before making your decision:

The WWAN market is a complex mesh of network protocols and standards. Second-generation network deployments are largely based on two competing technologies: TDMA and CDMA. The overwhelming majority of second-generation wireless customers use TDMA-based networks (TDMA, GSM, PDC). Interestingly, this looks to change, as the third generation of networks is based largely on CDMA technology (WCDMA, CDMA2000 1xEV). Figure 3.5 illustrates the move to third-generation networks, showing that TDMA is dominant in 2G, while CDMA is prevailing in 3G. 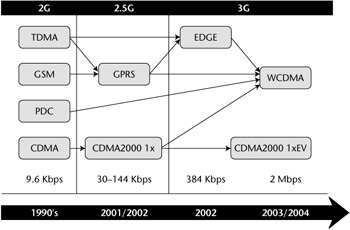 Without some analysis, this seems quite odd. Why are 3G networks based on CDMA when the majority of existing networks are TDMA-based? Is it because CDMA is a superior technology? If that is the case, then are network providers deploying an inferior technology?

Let us look at why this indeed may be the case. Network providers have to evaluate more than just the technology when implementing a wireless network. Some of the factors beyond the spectral efficiency of the protocol include ease of implementation (which affects time to market), technology maturity, backward compatibility, and implementation costs. TDMA technology has been around longer than CDMA and was less risky for companies deploying large networks. Furthermore, CDMA is more complex for operators to deploy, resulting in higher implementation costs and longer time to market. When 2G networks were being deployed, these factors made TDMA a safer choice.

Things have changed. The number of wireless users is growing rapidly. These users are demanding high-speed wireless access, in addition to high-quality voice services. The existing second-generation networks are not capable of providing these services. To accommodate these demands, networks have to be upgraded to provide higher capacity and faster bit rates. Third-generation networks had to adopt a standard with greater spectral efficiency, namely CDMA. The downside is that most of the existing network infrastructure has to be rebuilt to support the 3G networks. This can be an expensive and time-consuming task, so an intermediate step was added: 2.5G. These networks provide a stepping-stone in the evolution to 3G, as 2.5G networks can be deployed on existing 2G systems with relative ease. This enables carriers to provide the increased capacity and higher data rates while still maintaining backward compatibility. GPRS is a software overlay on TDMA/GSM networks, and CDMA2000 1x is a software upgrade to cdmaOne networks. GPRS and CDMA2000 1x also introduced some of the core 3G infrastructure in the form of packet-switched networks, making the move to 3G networks a bit smoother.

The final step (for now) is the move to the third-generation networks. This is a bit tricky as well, since not all 3G networks are the same. While most third-generation networks are based on CDMA, there is one option that is not—EDGE—and it's an attractive option, since it is a technology where TDMA and GSM/GPRS can converge, although it does not offer the same throughput as WCDMA. This situation will likely have one of two outcomes: a direct upgrade from GSM/GRPS to WCDMA, or an eventual second upgrade of EDGE systems to WCDMA.

On the cdmaOne side of the equation, we have CDMA2000 1x providing the intermediate step to either CDMA2000 1x EV, or WCDMA. Since all of these networks are CDMA-based, the upgrade is not quite as difficult. Finally, PDC is moving directly to WCDMA without a 2.5G network in between. This has led to the first commercial WCDMA deployments in Japan.

Wireless wide area networks continue to evolve. It has been over 20 years since the first-generation analog networks were deployed commercially. Since then we have seen the emergence of digital technology, resulting in higher-quality voice communication and the capability to transfer data wirelessly. The latest developments are high-speed packet-switched networks that provide always-on capabilities. These networks are a leading driver in the adoption of wireless data applications.

Table 3.5 summarizes the wireless networks that are currently being used for wireless data, showing the network frequency, data transfer rates, and deployment regions.

There is an increasing threat from WLANs to 3G deployments in highly populated areas and public hotspots. While network operators continue to deploy 3G networks, WLANS are being deployed in many public locations. WLANs provide a high-speed (usually 11 Mbps), low-cost solution for wireless data access. There is no doubt that they will have some impact on the business of 3G operators, but perhaps not as much as some might think. We have to remember that the primary revenue stream (by a long shot) for wireless wide area networks is voice communication, not data. Third-generation operators are counting on wireless data for new sources of income and profits, but at the same time voice communication remains the killer application for WWANs.