A computer disaster is any event that renders a computer unable to start. This can include the destruction of the master boot record stored on a system device, the deletion of one or more operating system files, destruction of a computer's physical system device, or destruction of the computer itself. The term disaster protection refers to any effort to prevent computer disasters and minimize downtime in the event of system failure. You can achieve a level of disaster protection by configuring an uninterruptible power supply (UPS) and implementing fault-tolerant disk configurations.

Disaster recovery is the restoration of a computer so that you can log on and access system resources after a computer disaster has occurred. One common type of computer disaster is the loss of local power, which can result in damaged or lost data on a server or client computer. While companies usually protect servers against this type of disaster, you might also consider providing protection for client computers against power loss, depending on the reliability of your local power supply.

An uninterruptible power supply provides power if the local power fails and usually is rated to provide a specific amount of power for a specific period of time. In general, a UPS should provide power long enough for you to shut down a computer in an orderly way by quitting processes and closing sessions.

Before purchasing a UPS for use with Windows 2000, determine whether the proposed device is on the Windows 2000 Hardware Compatibility List (HCL).

Configuring Options for the UPS Service

The configuration options for the UPS service can vary depending on the specific UPS device attached to your computer. For details about possible settings, see the manufacturer's documentation included with the UPS device.

After you have configured the UPS service for your computer, test the configuration to ensure that your computer is protected from power failures. You can simulate a power failure by disconnecting the main power supply to the UPS device. During the test, the computer and peripherals connected to the UPS device should remain operational, messages should display, and events should be logged.

You should not use a production computer to test the UPS configuration. You should use a spare computer or test computer. If you use a production computer, you could lose some of the data on the computer and possibly have to reinstall Windows 2000. Remember, when a computer suddenly stops, data can be lost or corrupted. The reason for having a UPS is to allow a graceful shutdown of the computers rather than an abrupt stop.

In addition, you should wait until the UPS battery reaches a low level to verify that an orderly shutdown occurs. Then, restore the main power source to the UPS device and check the event log to ensure that all actions were logged and there were no errors.

Some UPS manufacturers provide their own UPS software to take advantage of the unique features of their UPS devices.

Fault tolerance is the ability of a computer or operating system to respond to a catastrophic event, such as a power outage or hardware failure, so that no data is lost and that work in progress is not corrupted. Fully fault-tolerant systems using fault-tolerant disk arrays prevent the loss of data.

Although the data is available and current in a fault-tolerant system, you should still make backups to protect the information on hard disks from erroneous deletions, fire, theft, or other disasters. Disk fault tolerance is not an alternative to a backup strategy with offsite storage, which is the best insurance for recovering lost or damaged data.

To maintain access to data during the loss of a single hard disk, Windows 2000 Server provides a software implementation of a fault tolerance technology known as redundant array of independent disks (RAID). RAID provides fault tolerance by implementing data redundancy. With data redundancy, a computer writes data to more than one disk, which protects the data in the event of a single hard disk failure.

You can implement RAID fault tolerance as either a software or hardware solution.

With software implementations of RAID, there is no fault tolerance following a failure until the fault is repaired. If a second fault occurs before the data lost from the first fault is regenerated, you can recover the data only by restoring it from a backup.

When you upgrade Windows NT 4.0 to Windows 2000, any existing mirror sets or stripe sets with parity are retained. Windows 2000 provides limited support for these fault tolerance sets, allowing you to manage and delete them.

In a hardware solution, the disk controller interface handles the creation and regeneration of redundant information. Some hardware vendors implement RAID data protection directly in their hardware, as with disk array controller cards. Because these methods are vendor specific and bypass the fault tolerance software drivers of the operating system, they offer performance improvements over software implementations of RAID. In addition, hardware implementations of RAID usually include extra features, such as additional fault-tolerant RAID configurations, hot swapping of failed hard disks, hot sparing for online failover, and dedicated cache memory for improved performance.

The level of RAID supported in a hardware implementation depends on the hardware manufacturer.

Consider the following when deciding whether to use a software or hardware implementation of RAID: 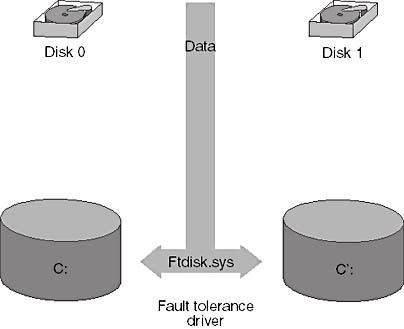 Mirrored volumes can be striped across multiple disks. This configuration is often referred to as RAID 10, RAID 1 mirroring, and RAID 0 striping. Unlike RAID 0, RAID 10 is a fault-tolerant RAID configuration because each disk in the stripe is also mirrored. RAID 10 improves disk input/output (I/O) by performing read and write operations across the stripe.

Because disk space usage is only 50 percent (two members for one set of data), mirrored volumes can be expensive.

Deleting a mirrored volume deletes all the information stored on that volume.

Windows 2000 Server also supports fault tolerance through striped volumes with parity (RAID 5). Parity is a mathematical method of determining the number of odd and even bits in a number or series of numbers, which can be used to reconstruct data if one number in a sequence of numbers is lost.

In a RAID-5 volume, Windows 2000 achieves fault tolerance by adding a parity-information stripe to each disk partition in the volume, as shown in Figure 25.2. If a single disk fails, Windows 2000 can use the data and parity information on the remaining disks to reconstruct the data that was on the failed disk. 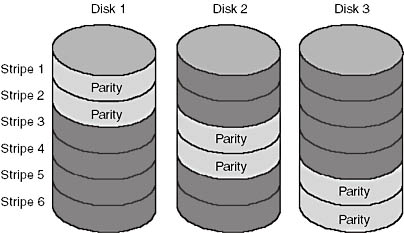 RAID-5 volumes have a cost advantage over mirrored volumes because disk usage is optimized. The more disks you have in the RAID-5 volume, the less the cost of the redundant data stripe. Table 25.1 shows how the amount of space required for the data stripe decreases with the addition of 2-gigabyte (GB) disks to the RAID-5 volume.

There are some restrictions that RAID-5 volumes implement in software. First, RAID-5 volumes involve a minimum of three drives and a maximum of 32 drives. Second, a software-level RAID-5 volume cannot contain the boot or system partition.

The Windows 2000 operating system is not aware of RAID implementations in hardware. Therefore, the restrictions that apply to software-level RAID do not apply to hardware-level RAID configurations.

Mirrored volumes and RAID-5 volumes provide different levels of fault tolerance. Deciding which option to implement depends on the level of protection you require and the cost of hardware. The major differences between mirrored volumes (RAID 1) and RAID-5 volumes are performance and cost. Table 25.2 describes some differences between software-level RAID 1 and RAID 5.

Table 25.2 Differences between RAID 1 and RAID 5

Mirroring uses only 50 percent of the available disk space, so it is more expensive in cost per megabyte (MB) than disks without mirroring. RAID 5 uses 33 percent of the available disk space for parity information when you use the minimum number of hard disks (three). With RAID 5, disk utilization improves as you increase the number of hard disks.

In the details pane, select an area of unallocated space. Then, from the Action menu, point to All Tasks and click Create Volume. Follow the steps in the Create Volume wizard to create a volume.

Windows 2000 Advanced Server and Windows 2000 Data Center support server clustering for an even higher level of fault tolerance. Clustering is beyond the scope of this training kit.

In this lesson you learned that you can achieve a level of disaster protection by configuring a UPS and by implementing disk fault tolerance. A UPS provides power in case the local power fails. In general, a UPS should provide power long enough to warn users connected to the server of the failure and to then perform an orderly shut down. You can configure the UPS service on the UPS tab of the Power Options Properties dialog box. After you have configured the UPS service for your computer, you should test the configuration to ensure that your computer is protected from power failures.

You also learned that in addition to UPS for power protection, fault-tolerant RAID provides an additional level of data protection. You can use fault-tolerant RAID configurations to implement disk fault tolerance as either a software or hardware solution. A software-level mirrored volume uses the Windows 2000 Server fault tolerance driver (Ftdisk.sys) to write the same data to a volume on each of two physical disks simultaneously. Windows 2000 Server also supports fault tolerance through software-level striped volumes with parity (RAID 5). In a RAID-5 volume, Windows 2000 achieves fault tolerance by adding a parity-information stripe to each disk partition in the volume. Generally, mirrored volumes offer read and write performance comparable to that of single disks. RAID-5 volumes offer better read performance than mirrored volumes. RAID implementations benefit from using multiple controllers (disk duplexing) because disk I/O is distributed among multiple data channels to increase performance and fault tolerance. You create software-level mirrored and RAID-5 volumes by using the Create Volume wizard in the Computer Management snap-in.