A virtual private network (VPN) is defined as the logical channel that allows the sending of data between two computers across an internetwork in a manner that mimics the properties of a dedicated private network. In this lesson, you will learn about VPNs in a routed environment and with the Internet.

A VPN allows you to send data between two computers across an internetwork in a manner that mimics the properties of a dedicated private network (see Figure 12.11). For example, VPNs allow users working at home or on the road to connect securely to a remote corporate server using the routing infrastructure provided by a public internetwork such as the Internet. From the user's perspective, the VPN is a point-to-point connection between the user's computer and a corporate server. The nature of the intermediate internetwork (hereafter referred to as the transit internetwork) is irrelevant because it appears as if the data is being sent over a dedicated private link. 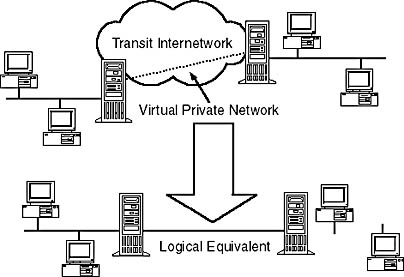 VPN technology also allows a corporation to connect with its branch offices or with other companies over a public internetwork (such as the Internet) while maintaining secure communications. The VPN connection across the Internet logically operates as a dedicated wide area network (WAN) link.

In both of these cases, the secure connection across the transit internetwork appears to the user as a virtual network interface providing private network communication over a public internetwork, hence the term virtual private network.

This entire process (the encapsulation and transmission of packets) is known as tunneling. The logical path through which the encapsulated packets travel through the transit internetwork is called a tunnel.

Tunneling can be achieved in one of the following ways:

Integrating VPN in a Routed Environment

Integrating VPN Servers with the Internet

VPN allows users to use their ISP to securely connect to corporate server instead of making toll (or toll-free) calls to the corporate office. Using the connection to the local ISP, a VPN is created between the dial-up user and the corporate VPN server across the Internet (see Figure 12.14).

To connect a network over the Internet (see Figure 12.15), you have two options:

Figure 12.15 VPN over the Internet

In both cases, the users are not charged based on the distance between the offices because only local physical links are being used.

For VPN connections to be reliably available, the corporate hub router acting as a VPN server must be connected to a local ISP using a dedicated line. The VPN server must be listening 24 hours a day for incoming VPN traffic. Although this is possible with a dial-up connection, it is less reliable because dynamically assigned IP addresses are commonly used and the connection may not be persistent.

In this practice, you will create VPN interfaces on each router.

A VPN is created when you send data between two computers across an internetwork in a manner that mimics the properties of a dedicated private network. In this lesson, you learned about VPNs in a routed environment and with the Internet.