The soccer playfield has been divided in 12 zones, 6 for each side (Figure 5.14). These zones have been chosen so that the change from one to the other indicates a change in the action shown, such as a defense action that changes into a counter-attack, or an attack that enters the goal box. Moreover it must be noted that typical camera views are associated with the selected zones. In some cases the zones can't be recognized from simple image analysis (e.g., zones near the center of the playfield), but the temporal analysis solves this problem. 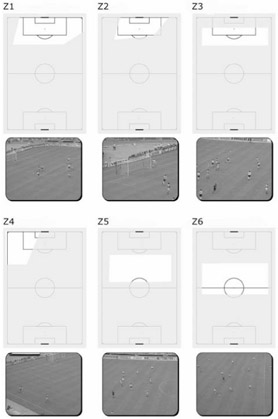 A Na ve Bayes classifier has been used to classify each playfield zone Zx. This choice is motivated by the fact that: i) we are interested in confidence values for each zone, to handle views that are not easily classified; ii) some descriptors are not useful for some zones (e.g., the C descriptor is not useful for the midfield zone); iii) some zones are mutually exclusive and some are not, thus it is not possible to define them as different values of a single variable. In Figure 5.18 the classifiers for Z1 and Z6 are shown. It must be noted that in some cases some values of the descriptors correspond to a single value of the variable of the classifier, e.g.,:

Playfield zone classification is performed through the following steps: playfield lines and shape are extracted from the image, descriptors are then calculated and the observation values of the classifier variables are selected. The classifier with the highest confidence value (if above a threshold) is selected.