One way to define the basic segments of the game industry is by the platforms for which games are distributed. Consoles dominate the sales of the industry by far. Of the $6.3 billion in sales in 2001, $4.6 billion of that were sales of console games, with computer game sales bringing in $1.42 billion, and edutainment titles the remaining $322.6 million (see Figure 15.3).

Within the console market, there are various competitors. Historically, the console market has always been dominated by one or two players, with cutthroat competition and technological advances meaning new platform releases every three to five years. The console machines of today have astounding processing power and graphics capabilities. This enables designers to create dramatic experiences with production values rivaling television and film. Here’s a breakdown of today’s top console platforms.

The PS2 dominates the current console market. As early as 2000, Sony had already shipped 51 million PS1 boxes, giving them a healthy head start, and with the release of the PS2, Sony now has the number one platform. As of early 2003, they had shipped 52.5 million units worldwide and seemed only to be gaining momentum. Sony added broadband connectivity to the PS2, is developing the upcoming PlayStation 3, is recruiting software developers, and is preparing to take console wars to a whole new level.

The Xbox is in second place and doing well in the U.S., but not so well in Japan and Europe. As of July, 2003, Microsoft had sold just over 9.4 million Xbox consoles worldwide, according to its quarterly financial statement. Microsoft projects the Xbox installed base will grow to between 14.5 and 16 million consoles by June 2004. Microsoft has also launched Xbox Live, with more than 500,000 subscribers worldwide to date. Despite heavy competition, Microsoft looks like it’s in the game for the long run, and with a mighty war chest and strong developers, it should continue to draw a healthy audience. 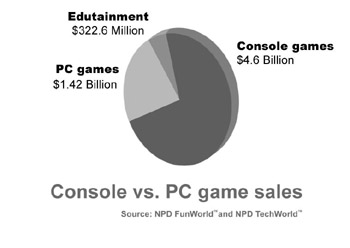 The GameCube looks like it may slip into third place, which historically is not a good place to be in the hyper-competitive platform wars. The GameCube is roughly even with the Xbox, having sold 9.4 million units as of April 2003. While Sony and Microsoft seem to be targeting the same market, Nintendo has aimed at a younger demographic and has produced some outstanding and original games. Time will tell if Nintendo’s strategy pays off. If anyone can survive as a third player, it’s Nintendo, which has a devoted following based on its years of domination in the marketplace and its history of releasing innovative games with memorable original characters.

In addition to consoles and PCs, digital games are distributed in several other ways. Handheld devices, arcade games, and emerging platforms such as cell phones, PDAs, and interactive television systems are other aspects of the industry that game designers need to pay attention to.

The GBA dominates the handheld gaming market. Others have tried to break the hold that Nintendo has had on this market since their release of the original Game Boy system, but have met with very limited success. Possible competition in the future may come from Sony’s PSP. Touted by Sony as a“21st century Walkman,” this multi-use device is scheduled to be released in 2004.

Games made for Windows dominate the computer game market. With high-end graphic cards, DirectX, and broadband connectivity, PCs are a powerful platform for gaming—especially online gaming. PC gamers tend to prefer strategy and simulation games to the action and sports games that dominate the console market.

The Mac operating system is a distant second. Despite what many true believers feel to be a much more elegant OS, Windows dominates both the home and office, while Apple’s share continues to hover between 3% and 5% of the desktop market. As a result, most PC games today are made for Windows, and only ported to the Mac OS if there is strong market reason to do so.

Arcade games are dwindling as a market these days. The advantage that arcades enjoyed in terms of superior graphics and technology when they were first introduced has been completely eclipsed by the advancements in home consoles and PCs. The only lingering advantage that arcade games have is in their ability to deliver sophisticated control systems—such as footpads, motion capture frames, mock race cars, and immersive VR environments. The success of games like Dance Dance Revolution lies in clever use of this advantage.

Emerging platforms are a next frontier for games. Many companies are working to develop the next great gaming platform, whether it’s interactive television systems, mobile phones with color screens, or DVD players that double as game machines. Most of these fall by the wayside as quickly as they crop up, but every now and then, one surprises us. Mobile phone games seem to be big as a new gaming platform in Japan right now, but in the U.S. they haven’t gained much traction. Similarly, pay-per-play games have made a big impact on the interactive television systems in the U.K. and Europe, but in the U.S. these systems have been slow to deploy.