Team Structure Plus Stages Of Development

As a project moves through the stages of development, different members of the team will work on it for varying amounts of time. For instance, the pre-production stage may require 100% of a game designer’s time but none of a QA tester’s time. On the other hand, the QA/polish stage may require 10% of a game designer’s time and 100% of a QA engineer’s time. Figure 13.5 shows a visual estimate of the amount of time required by various team members during different stages of production. More lines on the diagram imply more time spent.

This diagram provides a glimpse at how a development studio could run multiple projects at one time. For example, a game designer would have enough time to work on two projects at once if she was in pre-production on one and QA/polish on another. This concept applies to every member of the company across all of the company’s projects.

This brings us back to our original concern about what happens when a project is terminated and a developer is left fully staffed but without any revenue. The fact is that this happens all the time—not just with terminated projects but with gaps between projects. Smart (and lucky) developers find a way to overlap their projects, allocating resources and scheduling stages so that they can maximize their employee’s time and cover any naturally occurring breaks between projects. 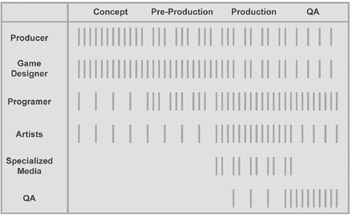 As you can imagine, running multiple projects at once can be quite complex, and some developers simply aren’t capable of managing such a situation, but in today’s world, if a developer is going to thrive, it’s wise to put these processes into place. Development jobs are inherently uneven, with lengthy gaps in between. The more you can plan ahead to smooth out cash flow, the better off you and your employees will be.