Team Foundation Build has a straightforward architecture with three distinct layers. On the uppermost layer sits the role-based Visual Studio editions and the Team Explorer. Using these tools, you can tap into Team Foundation Server to manually launch or stop a build, edit build types, or view build run reports and logs. You can also view build reports from the reports node in Team Explorer or set up a Web part on the Team Portal. Visual Studio enables you to manipulate source code, work with work items, and schedule builds. Team Foundation Build's data infrastrure is laid out as follows: There is a data tier layer, which has the build store or the build database, where all the data is stored, and client side reports are generated from it. This data is also pushed to the overall TFS warehouse from which reports are generated using SQL reporting services.

Finally, you have the build server. You can install Team Foundation Build under many scenarios: as a desktop build engine, on the same server as Team Foundation Server, and on a standalone server. Microsoft recommends the standalone server scenario as a good option. This makes sense for several reasons, including the reduction of CPU load on the other components of Team System. If you want to run tests or static analysis, you additionally need to install the Team Edition for Software Testers or the Team Edition for Software Developers, depending on your requirements and the type of tests you need to run. Figure 23-1 illustrates the layout of Team Foundation Build's architecture. 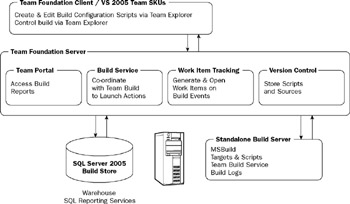 Setting up your own build lab

During the installation process, you have to provide the installer with account information such as the username and password. You should create a dedicated account with sufficient privileges to enable the TfsBuildService to successfully run. If you have misconfigured the build machine account, you can easily add the permission later and the Services Control Panel applet to set the service to run.

To perform test automation, you need to have the appropriate Team System role-based edition installed on the build machine. We recommend installing the Team Edition for Developers, as it contains important automated tests such as unit tests and static code tests.

After the install finishes, create two folders that will be used as part of the build process. The first one is the interim folder, called the build location, where Team Foundation Build will extract and build your solution. The second is the drop location, a shared folder that must be accessible over the network using the Universal Naming Convention (UNC) format (/server/shareddropfolder/). This folder must be given full permissions to the build service account and the Team Foundation service account (TFSSERVICE). The reason for this is twofold: First, if you don't share the folder, your team members will not be able to access the builds unless they have physical access to the build machine. Second, the build process will fail primarily because the drop location is the place where all build results, including test results, are published. In a scenario where a tester is manually publishing test results against this build, he or she would need to have permission to publish content on this folder. Hence, it is recommended that everyone have valid permissions on this folder. You can test whether the drop folder has been configured correctly by browsing to the folder over the network.

Team Foundation Build has specific security rights and permissions built on top of Team Foundation Server's security groups. In fact, Team Foundation Build has a series of specific privileges to enable (or disable) functionality. The inclusion or omission of permissions will affect the Visual Studio 2005 UI. For example, if you are allowed to perform an action, the corresponding UI command button or option will be enabled. Here are a few of the more important build privileges you should be aware of: