As discussed in Chapter 1, the advanced Web services specifications championed by IBM, Microsoft, and other industry leaders provide a platform for extending the functionalities of Web services without sacrificing interoperability. Because standardization and industry adoption promotes interoperability, developers on disparate platforms will need only to implement Web services against these widely adopted Web service specifications. For .NET Web services, this still leaves the difficulty of having to either serialize and deserialize the necessary SOAP headers manually or else directly leverage the .NET Framework to create custom filters to handle these headers.

Fortunately, to ease your pain when developing Web services, Microsoft has developed a product offering that extends the .NET Framework to support these evolving Web service interoperability standards. Known collectively as Web Services Enhancements (WSE), this offering is made up of a set of classes that implement these new protocols as well as a set of filters that intercept incoming and outgoing SOAP messages and interpret or generate the SOAP headers to support the requested functionalities. The specifications supported by version 2.0 of WSE include

The engine that drives Web Services Enhancements is a separate WSE runtime that s integrated with the .NET Framework and can be hosted by ASP.NET. This runtime essentially intercepts SOAP request and response messages and invokes a set of filters that either serialize specification-compliant SOAP response message headers (in the case of outbound response messages) or interpret specification-compliant request message headers (in the case of inbound request messages). These filters handle SOAP messages transported over both HTTP and TCP. The process for receiving and handling a SOAP message using ASP.NET and WSE is represented in Figure 2-5. 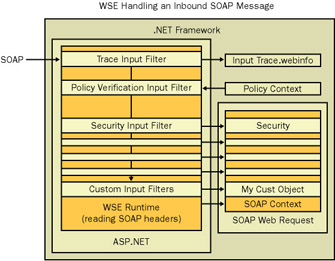 In this process, each filter reads its associated SOAP header, if available, and generates an object that s added to the SoapContext class for the message that represents the information in that particular header. This is repeated for each WSE filter before the message (with these headers removed) is passed back to ASP.NET for normal handling. After all of the message headers have been read, the Policy Input Filter can check for message compliance against the Web service s published policies.

Conversely, WSE is employed in a similar fashion when an outgoing response method is created, as shown in Figure 2-6. 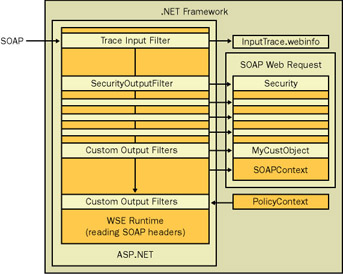 The filters and the WSE runtime are implemented by the Microsoft.Web.Services assembly (Microsoft.Web.Services.dll), and WSE provides a low-level API that lets you programmatically determine the behavior of these input and output filters in order to implement the desired functionalities described by the various specifications.

Since WSE leverages both the Microsoft .NET Framework and Microsoft Internet Information Services (IIS), WSE can be run on almost any machine running a recent version of the Windows operating system. The exact system requirements for WSE version 2.0 are as follows :

Note that not all features are supported on all platforms. For example, Kerberos security tokens are supported only on Windows XP and Windows Server 2003. For a complete list of requirements, see the WSE documentation.

Since the .NET assembly that implements WSE is contained in a single library file, installation is simple. During setup, the WSE 2.0 installation program copies the Microsoft.Web.Services.dll file into C:\Program Files\Microsoft WSE\v2.0 and adds this assembly to the global assembly cache (GAC).

To be able to use WSE with an ASP.NET-hosted Web service, you need to also add some information to the Web.Config configuration file for the Web service. If you have ever modified these XML-based ASP.NET configuration files, you know that it is fairly easy to make a mistake that can break your application. Fortunately, Microsoft also provides the WSE Settings tool that integrates with Visual Studio .NET and can be used to automatically make the needed modifications to these configuration files. If you re not using Visual Studio .NET, you ll still need to manually configure WSE settings. However, WSE documentation tells you how to do this, and I won t cover it in this book. 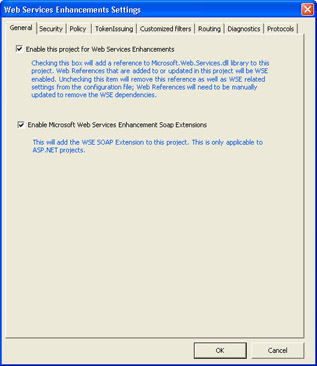 With this tool, enabling WSE for an ASP.NET Web service is as simple as selecting both check boxes on the General tab. To enable WSE for a application consuming a WSE-enabled Web service, you need only select the Enable This Project For Web Services Enhancements check box. The rest of the tabs in this tool allow you to configure various components of WSE that correspond to the specifications that the Web service needs to use. I will discuss each of these in the corresponding chapters later in this book. WSE optionally installs a set of stand-alone configuration tools as well as a tool that simplifies the process of finding and using X.509 certificates with WSE.

WSE includes a full API that allows you to programmatically control the behavior of the runtime and each of the message filters. The WSE runtime can be configured to use TCP/IP as a transport for SOAP instead of HTTP, and it also supports asynchronous messaging. However, since most Web services implement synchronous SOAP messaging over HTTP, I won t be discussing these other WSE programming options in this book.

When using SOAP over HTTP provided by ASP.NET, the SoapContext class provides the core control of the behavior of WSE, meaning which specific interoperability headers are supported for a given SOAP message. In the WSE programming model, when a SOAP message is received, the runtime generates a RequestSoapContext object for the incoming request. The SoapContext for the message can then be accessed by the RequestSoapContext.Current property, which enumerates the information contained in the WSE-specific header elements of the message. For example, if an incoming message has a WS-Addressing prescribed From element, the sender information for the message can be accessed using the SoapContext.From property, as follows:

When you re programming a client application that consumes WSE-based Web services, the proxy class that represents the Web service in the .NET Web services client programming model must inherit from the Microsoft.Web.Services.WebServicesClientProtocol class. The WSE Settings Tool should automatically generate a new proxy class with Wse appended to the name . For example, WebServiceProxyClass would be changed to WebServiceProxyClassWse with the correct inheritance added. You can also manually add this inheritance to the proxy class by modifying the Reference.cs file that is automatically generated by the Add Web Reference tool. After adding the Web reference, open Reference.cs and add the WebServiceClientProtocol inheritance as in the following example: