The issue of whether to write comments in your code, and what kind of comments to write, has a tendency to make developers argue with one another. On the one side, you have people who feel that the code should be its own documentation and that comments are superfluous. On the other side are people who think that well-written comments make code easier to read. I personally tend to side with the latter group, with one caveat: Writing good comments is not an excuse to write bad code.

There are a couple of commenting styles that I don’t care for in source code. I tend to think of these as “noise comments”—comments that make the code longer without really bringing any value to it. The first type of noise comment is the comment that simply repeats the code:

The comments in this code block don’t add anything to the code. Indeed, they’re just a restatement of the code into some sort of stilted English. If someone was absolutely unfamiliar with C#, such comments might help that person to understand what the code is doing. However, it’s safe to assume that most people who will read your source code have a pretty good grasp of the language already and are trying to figure out what your program is doing, not what individual statements are saying.

The other form of noise comment is the formal procedure header:

I admit it—I’ve written plenty of formal procedure headers in the past, particularly when I was working as a contract programmer. They’re a great way to make yourself look busy under the guise of adding value to the source code when you can’t figure out how to solve the actual problem. But everything in this comment is purely redundant information:

If you’re getting paid by the hour and no one is checking your work carefully, write all the noise comments that you want. Of course, such behavior is not the hallmark of a real professional! If the goal is to get your own product to market without wasting time, and to do so with maintainable code, don’t bother.

Some comments are merely placeholders or notes to your future self:

Visual Studio .NET offers good support for placeholder comments by letting you tie them to the Task List. Select Options from the Tools menu, and then navigate to the Task List section of the Environment options, as shown in Figure 4.3. You can use this section of the Options dialog box to define comment tokens that indicate a task. 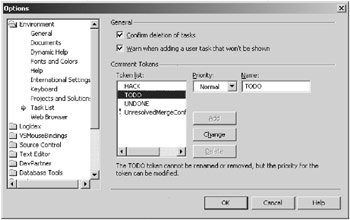 The Task List window, shown in Figure 4.4, will automatically keep itself up-to-date as you add and remove the indicated comments. You can double-click on any task comment to go directly to that comment in your code. This is a handy way to remind yourself to fix things. As a general rule, you shouldn’t be shipping code that still contains UNDONE or TODO tasks.

Like assertions and exceptions, comments should have a reason to exist. The noise comments I mentioned earlier fail this simple test, while placeholder comments pass it. Two other types of comments are also useful.

Summary comments are superficially similar to comments that just repeat the code in that they tell you things you could learn by reading the code carefully. For example, here’s a block of the DownloadEngine component with summary comments inserted:

In this case, the comments don’t add anything that a good programmer couldn’t figure out by reading the code. But they’re still useful, simply because the comments are shorter than the code. With the default color-coding in Visual Studio .NET, you can skim for green text to easily read just the comments. Such summary comments give you a faster way to grasp what a procedure is doing without having to read every single line of code.

There’s one major problem with writing good comments: They’re not tightly coupled to the code that you’re commenting on. What this means is that comments and code can (and do) drift out of synchronization. If you dive into the code for a quick fix to respond to a problem that just turned up in the debugger, you may forget to review the comments and fix them as well.

People who focus on this problem tend to be in the “self-documenting code” category. If the comments are going to drift away from the code, and the code itself is definitive, why bother with comments in the first place? Just write understandable code and be done with it.

I’m sympathetic to this point of view, but I don’t agree with it. The basic mistake here, I think, is to view comments as just a restatement of the code. For noise comments, that’s true. But if you’re writing good summary or intent comments, there’s more to the comments than just restating the code in English. Comments offer a more efficient way to get to the part of the code you want, just as an index helps you find the page in a book that you want to read. A “self-documenting book” wouldn’t need an index; you just read the book to find the page you want. But most of us would agree that the index adds efficiency in some situations.

The real cure for the comment synchronization problem is to exercise some discipline. When you change code, make sure the comments are still sensible, and change the comments if they need to be resynchronized with the code. You’ll also find that this is less of a problem if you concentrate on writing a few good intent comments. Most bug fixes change the implementation of code, but not its intent.

Another approach to keeping code and comments synchronized is to use literate programming, in which special tools let you write documentation and code together, separating them out for printing and compiling. In this approach, a program is considered a work of literature rather than source code to be commented on separately. You can find more information at the Literate Programming website (www.literateprogramming.com/). I’m not aware of any literate programming tools specifically targeted at C#, but the LEO text editor (http://personalpages.tds.net/~edream/front.html) lets you experiment with literate approaches in any source code language.