Assertions and exceptions have similar purposes; they both notify you that something is not right in your application. In general, you’ll want to reserve assertions for design-time debugging issues and use exceptions for runtime issues that might have an impact on users. Nevertheless, you should know how to use both tools to catch problems early.

When you use an assertion, you assert that a particular Boolean condition is true in your code and that you want the Microsoft .NET runtime to tell you if you’re wrong about that. For example, in the DownloadEngine component of Download Tracker, it doesn’t make sense to try to download a file from an empty URL. Ideally, I’ll never write code that attempts this; there should be validation of user input to prevent this situation. But if it does happen, through some mistake on my own part (or as a result of some undue sneakiness on the part of the user), I’d rather know immediately.

To use assertions in .NET, you need to set a reference to the System.Diagnostics namespace. Then you can use the Debug.Assert or the Trace.Assert method. For example, here’s a snippet of code to verify the presence of some data in the SourceUrl property:

The first argument to the Assert method is a Boolean expression that the Common Language Runtime (CLR) will evaluate at runtime. If it evaluates to true, then nothing happens, and the code keeps running with the next line in the application.

However, if the Boolean expression evaluates to false, the CLR halts execution and uses the other two arguments to construct a message to the developer. I can test this with the aid of a quick little harness application. Figure 4.1 shows the result of calling into this method with an empty SourceUrl property.

Notice the truly horrid caption of the message box that displays the assertion, which tells you that the buttons do something other than what their captions might lead you to believe. Apparently Microsoft decided to overload the existing system message box API rather than design some custom user interface for assertions. Don’t do this in your own code!

As I mentioned earlier, you can use either the Trace.Assert or the Debug.Assert method in your code. These classes are identical, except that the Debug class is active only if you define the DEBUG symbol in your project, and the Trace class is active only if you define the TRACE symbol in your project. These constants are commonly defined in the Build section of the project properties (available by right-clicking on the project node in Solution Explorer and selecting Properties), as shown in Figure 4.2. 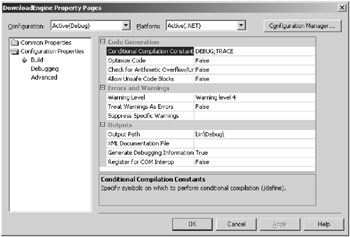 By default, the Debug configuration defines both the TRACE and DEBUG constants, and the Release configuration defines the TRACE constant. Thus, Trace.Assert is active in both default configurations, whereas Debug.Assert is active only in the Debug configuration. I tend to use Debug.Assert because I usually reserve assertions for design-time debugging rather than end-user error logging. Because assertions are an aid for the developer rather than the end user, I don’t believe they have a place in release code. Instead, code you release to other users should implement an error-handling and logging strategy that precludes the necessity for any assertions.

You can also create your own class that inherits from the TraceListener class if you want custom behavior. You could, for example, export all assertion results to an XML file. When doing so, you must at least implement the Write and WriteLine methods.

Assertions in Other Languages

Most modern computer languages have some built-in assertion facility similar to the Trace and Debug support in .NET. Even if your language of choice doesn’t support assertions, it’s easy enough to add them by writing a small bit of code. In general, you’d use a structure something like this:

That is, if the asserted condition is false, you want to display the message and halt the program. Otherwise, the procedure will return to the calling code.

Generally, you don’t want end users to see the results of assertions. Ideally, you’ll fix any problems that lead to assertions firing before you ship the code, but even if you don’t manage to do that, you should develop a friendlier strategy for end users than just dumping stack traces on their screen. That’s why I suggest using Debug.Assert rather than Trace.Assert in most cases. Assuming that you’re shipping the release configuration to your users (and you should), debug assertions will simply vanish when you compile the code.

That leads to another guideline for the good use of assertions: Make sure assertions don’t have side effects. Assertions should check that something is true, not execute any other code. For example, here’s a bad use of an assertion:

See the problem? If you take out the assertion, then newPath will never get initialized. Putting executable statements into assertions is a good way to introduce such mysterious errors when you switch from debug to release builds.

Another mistake is to use assertions to verify that your compiler and language are working properly:

If you can’t trust your compiler to allocate three array members when you tell it to declare an array with three members, you might as well just give up now. No amount of assertions will make your applications any more reliable.

So what should you use assertions for? One excellent use for assertions is to verify that input data is reasonable. If you refer back to the first code snippet in this chapter, you’ll see that is what I’m doing with the SourceUrl argument. Note that I’m checking in the method that uses the value, not in the method that sets the value. By placing the assertion here, I can make sure that any code that calls this method is using reasonable values.

Another good use for assertions is to check your assumptions after a particularly involved or tricky piece of code executes. For example, you might make some calculations that are designed to yield a percentage based on a complex set of inputs. When the calculations have finished, you could use an assertion to verify that the final result is between zero and one.

Exceptions represent another way to handle problems with your code. As the name implies, exceptions are for exceptional situations—primarily errors that cannot be avoided at runtime.

You should already be familiar with the coding mechanics of exceptions in C#, but here’s a quick review just in case. The following four statements together make up the exception-handling mechanism:

So, the DownloadEngine component takes a relatively straightforward approach to exception handling. It catches any exception in its own operations, wraps this exception in a new custom exception (more on that in a moment), and throws it to the parent code. This is a typical pattern for library code, which doesn’t have a user interface to present errors directly to the end user. Ideally, every user interface component will validate the input so that such errors never happen. But as a library writer, you can never be quite sure that’s going to happen (unless the library is purely for internal use, and you have control over every single application that calls the library).

In the case of the DownloadEngine component, I want to pass the actual failing Download object back to the caller so that it can determine which download failed. Thus, I’ve created a custom DownloadException class in my code.

Here are some guidelines that you should follow when creating a custom exception class:

Here’s the code for the DownloadException class. In addition to implementing the required constructors, it supplies two other constructors that accept a Download object.

In addition to the rules for creating exception classes, other guidelines you should keep in mind when using exceptions in your code include the following: