Previous page
Table of content
Next page
Inputs and Outputs

A studio setup won't get far without the ability to get sound in and out of the electronic and digital domains and connected to the computer. Additional hardware gives physical control for the virtual parameters of software. We'll start building our studio by assembling the gear we need for inputs and outputs. The ultimate goal is a complete creative workspace, as shown in Figure 2.1 .

Figure 2.1. A fully equipped, computer-based studio in action. M-Audio (www.m-audio.com) set up this studio, so it features its products. Notice that even this digital audio manufacturer still uses some vintage keyboards. (Photo courtesy M-Audio) 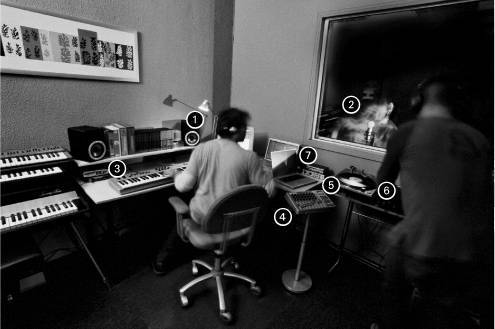 Transducers (microphones, monitors , headphones) are essential for getting sound in and out of the electronic domain.

A separate control room isolates the recording area from the sound of the computers.

Keyboards shown here include keyboards with sound production abilities and instruments designed for controlling soft synths, such as this USB- powered M-Audio Radium.

An audio interface, like the M-Audio FireWire models shown here, gets audio in and out of the computer (see p. 50).

External hardware like these vinyl turntables and cross-fader are great for those times when software just doesn't feel and sound the same as analog equipment.

Make sure you have a computer capable of running audio software (see p. 60), and an application for recording and hosting software instruments and effects (see p. 71). Shown here are Apple PowerBooks running Ableton Live.

As explained in Chapter 1, electronic music systems of any kind, analog or digital, must use transducers to convert sound to and from vibrations in the air. For example, to play back sound, you'll need studio headphones and/or speakers , and you'll need microphones for recording.


Make sure your playback equipment is "pro." Pro devices are very different from consumer models, even those in the same price range. Consumer audio equipment is often intentionally "sweetened," emphasizing certain frequency ranges, because that's what consumers are accustomed to hearing. That's a disadvantage when you're trying to adjust your audio mix for a wide range of equipment, so pro "studio" models are designed to be truest to the original sound.

Prices on all these products range from a few dollars to tens of thousands of dollars, but that doesn't mean you won't find inexpensive workhorses in pro studios . See Table 2.1 for help identifying pro-level equipment that won't break the bank.

Table 2.1. Recording and Playback Gear: Where to Start

The line-in and headphone jacks on your computer are fine for occasional recording and listening, but dedicated audio/MIDI interfaces like the one shown in Figure 2.2 offer higher audio fidelity and more connection options. They might also feature extras like bundled software.

Figure 2.2. A hardware audio interface, such as this Edirol FA-101 Firewire interface, shown here in front and rear views, will be the primary connection between your computer's audio software and the outside world. (Photo courtesy Edirol) 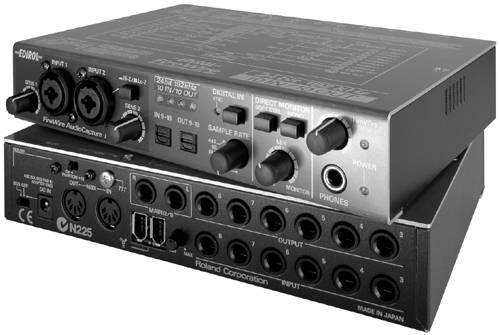 Why not just use the audio I/O built into your computer? First, these interfaces usually lack the number and size of connections you need, and rarely accommodate the lower signal level generated by guitars, microphones, and turntables. Some computers lack sound inputs altogether. Second, built-in interfaces tend to be too noisy for recording, especially if they're not properly insulated against interference and computer noise. In addition, their dynamic and frequency ranges often aren't as good as those of dedicated audio interfaces.

Interfaces for every budget and need are readily available, so your primary job is to navigate three essential elements on the specifications sheet: inputs and outputs (I/O), digital-to-analog (D/A) and analog-to-digital (A/D) conversion quality, and the means by which the device communicates with your computer ( bus ).


Ins and outs of I/O

Since one of the primary reasons for buying an interface is to add additional inputs and outputs, you'll want to first think about what equipment you have and how many inputs you'll need to record simultaneously . For instance, if you're a vocalist playing an external keyboard, you'll need one input for the vocal mic and two for the external keyboard, for a total of three inputs. If you need surround or other multichannel outputs, you'll also need multiple simultaneous outputs beyond the standard two-channel stereo. See Table 2.2 for some of the most common setups.


Aside from analog audio I/O, other connections are necessary for hooking up specific MIDI and digital equipment:

Chapter 3 explains different connection types and how to manage them.

Specifications for bit depth and sampling rate are significant to audio quality, as explained in Chapter 1, although 16-bit 44.1 kHz is sufficient for most users. The quality of the digital audio circuitry itself plays a considerable role as well, so you might want to check the reviews of an interface you're considering in pro audio publications like EQ and Sound on Sound . Some pros even purchase pricey stand-alone D/A converters, although those with home studios are more likely to use the converters built into their interface.


Connecting to your computer

Different interfaces connect to the computer via various connection types, or buses , such as FireWire and USB ( Table 2.3 ). Based on available bandwidth, buses can offer multichannel audio with nearly real-time performance. (Faster buses allow more channels.) 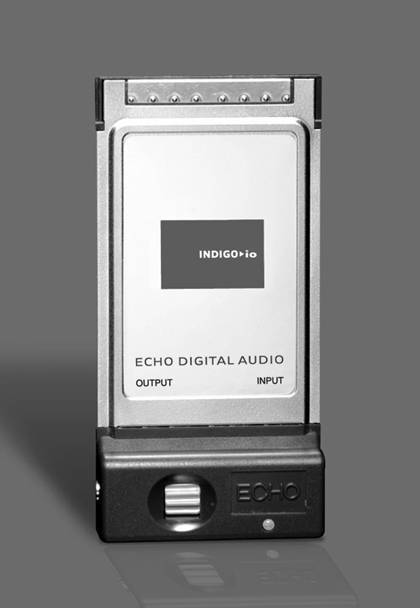 Digidesign has always sold its hardware and software as a single bundled package, from its entry-level Mbox to its high-end Pro ToolsHD. But other vendors also typically sweeten their audio interface packages by including free software. These are often limited editions rather than full-blown versions of the software you'd buy separately, but they can be a good starting point. Bundled software includes packages like Pro Tools LE (available via Digidesign only), the full versions of entry-level audio workstations like Mackie Tracktion and Steinberg Cubase LE, and limited editions of programs like Propellerhead Reason and Ableton Live.

You can make music on a computer using just a mouse and QWERTY keyboard. Applications like Ableton Live and Apple Logic even let you type on your keyboard to play instruments. But for more tactile feedback, controller input devices let you assign onscreen settings to physical knobs, faders , buttons , and piano-style keyboards ( Table 2.4 ).

With all the devices available, you could wind up with a lot of different pieces of equipment. So to reduce complexity and cost, manufacturers increasingly are combining functions into integrated devices ( Table 2.5 ).


Figure 2.4. The Tascam FW-1884 combines a motorized control surface with a multichannel audio interface to turn your computer into a fully powered recording workstation in one device. (Photo courtesy Tascam) 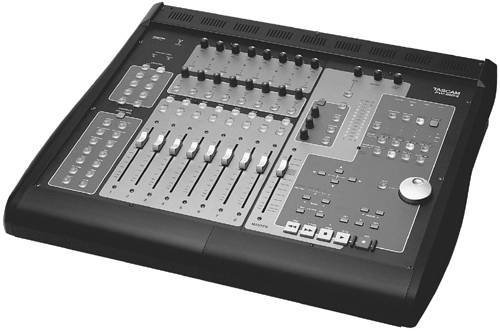