I talked about poorly described content, conflicting content, and out-of-date content-what's left? How about content that is missing or useless? Since content is primary on the Web, pages or sites that are missing important content are just using up space and domain names .

You Just Have to Know

In late 2001, Slims, a nightclub in San Francisco, hosted a bluegrass music festival in Golden Gate Park. Its website, Slims-SF.com , publicized the event (Figure 1.26[A]). It announced that the festival would take place in "Speedway Meadows." For people who know where Speedway Meadows is, that's sufficient, but for people who don't, it isn't. I didn't know. I browsed around the site trying to find out where in the park the festival would be. I eventually found a link to Shuttle Details (Figure 1.26[B]). After clicking there, I was transported to a generic shuttle bus page provided by the Golden Gate Park Concourse Authority (Figure 1.26[C]). It had almost no information, but it did have a link to a map of Golden Gate Park (Figure 1.26[D]). Unfortunately, the map did not mark where Speedway Meadows is. So much for the power of the Web. 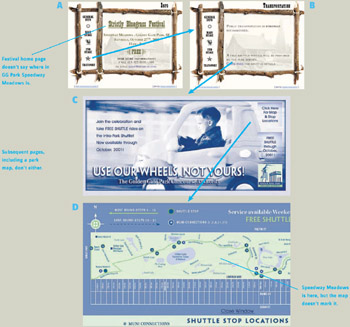 The previous examples were strictly informational web-sites. For an example of missing important content at an e-commerce site, take a look at a catalog page at online electronics store ValcoElectronics.com. The excerpt shown lists two products (Figure 1.27[A]). The first one has a product code and a name , but the second has only a product code. If you don't know what an LGW40 is, you can just click on the link to go to the detailed product page, right? Right, but you won't find much more information there (Figure 1.27[B]). Sure, whatever an LGW40 is, I'll take a dozen ! At least they don't weigh much. 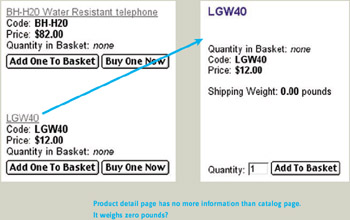 If the LGW40 were the only product on ValcoElectronics' site that exhibited this lack of information, it could be dismissed as an isolated slipup. However, other products for sale on the site also exhibit the problem. Therefore, it is either a systematic data-extraction bug or a design flaw.

Thank You So Much for Such Useful Information!

My final example of useless content comes from United.com. While customers are trying to book a flight, the site distracts them with enticing links to useless marketing statements. Two examples are shown in Figure 1.28. 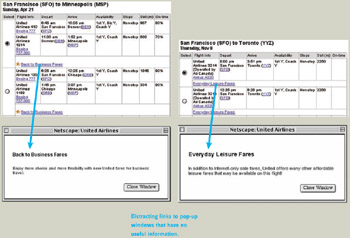 Figure 1.28: www.United.com (Mar. 2002)-While you are trying to book a flight, the site distracts you with enticing links to useless marketing statements.