In a fundamental sense, the basic organizational structure of the business enterprise has changed as firms have become more intelligent and have better and quicker access to critical information. In the past, firms pursued efficiency by vertically integrating. According to Edmonds (1923), by 1920, General Motors had extended its scope so that its units or subsidiaries produced not only all engines used in cars, but a large proportion of other components—gears, axles, crankshafts, radiators, electrical equipment, roller bearings, warning signals, spark plugs, bodies, plate glass, and hardware. Why did such firms develop organizational structures with extensive vertical integration? For answers, we turn to ideas first put forth by Nobel Prize-winning economist Ronald Coase.

In "The Nature of the Firm," Coase (1937) explained the basic economics of the business enterprise and outlined the subtle logic of how firms pursue efficiency in a complicated world by addressing this question: "Why are some activities carried on in firms and others in markets?" The answer lies in the existence of transaction costs.

Generally speaking, Coase argued that firms exist because information (transaction and coordination) costs are too high for each buyer to feasibly employ each production input and then coordinate the production of the desired good or service. But as these costs fall because of new information-sharing technologies, firms should specialize and trade to a greater extent than ever before. Such firms would be expected to have greater focus and more customized services, yet still create efficiencies through established business partnerships.

Is there any evidence that transaction costs are declining? And if so, what are the macroeconomic implications as businesses reorganize their organizational structures?

Turning first to the issue of transaction costs, Lucking-Reiley and Spulber (2001) argue that B2B e-commerce substitutes capital—in the form of computer data processing and Internet communications—for labor services, thereby increasing the speed and efficiency of economic transactions. They divide potential productivity gains from B2B e-commerce into four areas: automation of transactions, new market intermediaries, consolidation of demand and supply through organized exchanges, and changes in the extent of vertical integration. The authors' conclude that even small enhancements in the efficiency of transactions will eventually produce overall large savings.

Moreover, by reducing transaction costs, increasing management efficiency, and increasing competition, Litan and Rivlin (2001) estimate that the Internet will bring total annual cost savings to the U.S. economy of $100 billion to $230 billion. This translates into an annual contribution to productivity growth of 0.2 to 0.4 percent above what it would otherwise have been.

At a microeconomic level, Dell Inc. provides a quintessential example. Dell's Internet-based build-to-order system has allowed the firm to reduce the number of days' supply of inventory in parts and subassemblies from 31 days in 1996 to around four today. Using new information technologies, Dell has turned traditional manufacturing on its head by saying it will not build anything until it receives an order from a customer. Dell customizes product attributes to exactly what the customer demands, and in doing so, the firm has essentially eliminated all inventories from its supply chain. 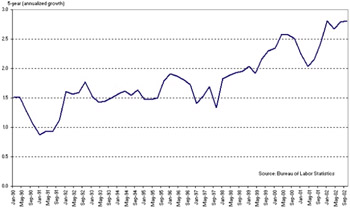 But the distribution of the employment increases by the employment size of the enterprise has not been uniform. Smaller firms (those with less than 500 employees) have actually seen slower employment growth than larger firms (those with more than 500 employees). Small firms have seen employment increase 13.7 percent from 1991–1999, whereas large firms have seen employment grow at nearly twice that rate (27.0 percent). But the bigger increase for large firms may be due to the fact that large firms are establishing more physical locations in which to conduct business than small firms. Large firms have increased their total number of establishments from 1991 to 1999 by 29.2 percent, whereas small firms increased the number of establishments by 10.8 percent. 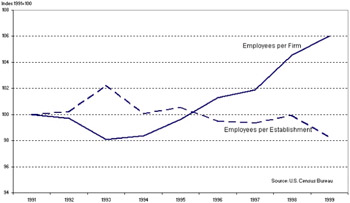 Figure 6: Large Firms are Vertically Disintegrating and Getting Leaner.

Numerous examples abound from many industries where companies are vertically disintegrating and outsourcing more and more of what they once did, or could do, themselves. Henry Ford's first large manufacturing facility in Detroit used to employ 100,000 workers and make 1,200 cars a day. Today, that same plant produces 800 Mustangs a day and employs 3,000 workers. Such evidence is consistent with the view advocated by Coase that as transaction costs decline, firms will pursue their competitive advantage and focus more on specialization and trade.

[5]Economist Adam Smith (1776) argued that private competition free from government regulations allows for the production and distribution of wealth better than government-regulated markets. As Smith said, private businesses organize the economy most efficiently as if "by an invisible hand."