As shown in Figure 1, U.S. real GDP growth has been less volatile in recent years than in the 1960s, 1970s, and early 1980s. Using the first quarter of 1984 (designated as 1984:1) as the break date, real GDP growth volatility has declined from 4.5 percentage points in the 1959:1–1983:4 period to just 2.3 percentage points in the 1984:1–2002:4 period. [2] This 2.2 percentage point reduction in volatility is statistically significant and is a powerful indicator that the U.S. economy has become more stable. In particular, and as displayed in Figure 2, extreme movements in output—growth rates below -4 percent and more than +10 percent—are much less likely today than 20 or 30 years ago. As a result, outright declines in GDP dropped from 18 percent of the quarters in the earlier period to just 9 percent of the quarters since 1983. 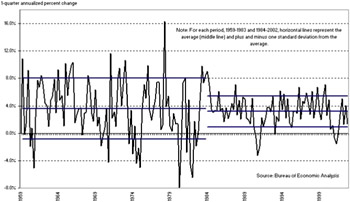 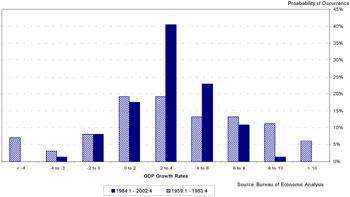 Table 1 reports the standard deviation of GDP growth and its major components for the two sample periods. The table shows a reduction in growth volatility for all of the major components of GDP, but the greatest decline occurs in durable goods. Whereas aggregate GDP growth volatility falls by 49 percent from the pre-1984 period to the post-1983 period, volatility in durables drops by 51 percent, in non-durables by 36 percent, in services by 23 percent, and in structures by 42 percent. Thus, durables volatility is most closely associated with the volatility of aggregate GDP. But, because the durable goods sector accounts for only about 20 percent of total output in the economy, we must also take into consideration the sector's size and the correlation between its growth and GDP growth to determine more precisely the sector's overall contribution to the reduction in GDP volatility. 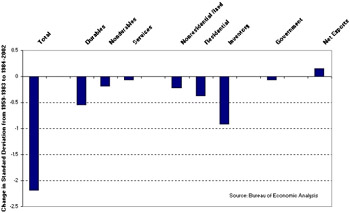 These three components, therefore, seem to be most responsible for the economy's greater stability and provide some clues about the likely underlying causes of improvement. Since the early-1980s, U.S. businesses have adopted improved inventory control and supply chain management systems that have increased operating efficiencies by making better use of more accurate information. In addition, financial deregulation and innovation since the mid-1980s have reduced the sensitivity of residential construction and consumer lending to swings in market interest rates. Households and businesses have greater access to credit and financial intermediaries have credit-scoring systems and more information available to make better lending decisions. Thus, it appears that tighter inventory controls and financial deregulation and innovation have contributed a great deal to the economy's increased stability. [4]

This finding is reinforced in Kahn, McConnell, and Perez-Quiros (2002) who perform an experiment like the one presented in McConnell and Perez-Quiros (2000). Using a structural break of 1985:1 for durables growth, an artificial series for durable goods growth is generated under the counterfactual assumption that the residual variance post-1984 is equal to its average value in the pre-1985 period. From this, the authors find that the volatility reduction in the durable goods sector is large enough to account for more than two-thirds of the decline in aggregate volatility. Again, improved inventory management is a plausible answer to explain much of this decline.

New optimization techniques, production process improvements, and information technologies have combined to provide tremendous opportunities to streamline industry supply chains and reduce reliance on inventory buffers. At all points along industry supply chains, decision-makers (and artificial intelligence systems) can use real-time information to quickly limit imbalances between demand and production. Thus, better information should be associated with both a reduction in production volatility and tighter inventory levels as production decisions better match actual demand.

Lee and Amaral (2002) describe the effective deployment of a supply chain performance management system at DaimlerChrysler's Mopar Parts Group. As they say, supply chain performance management is more than a measurement process. It is a cycle of identifying performance exceptions, understanding issues and alternatives, responding to problems/opportunities, and continuously validating the data, processes and actions. In the first year following implementation of this system, DaimlerChrysler shrunk their decision cycle time from months to days, reduced transportation costs, increased the percentage of orders completely filled, and reduced inventories by $15 million.

Thus, the goods sector, and in particular the durable goods sector, has not only become more stable, but, as signified by the reduction in the ratio of production volatility to sales volatility, has also seen production volatility become more stable relative to sales volatility. This finding leads us to conclude that there has, indeed, been a change in the way that inventories are managed and that such changes have led, in turn, to a more stable economic environment in the United States.

The inventory-to-shipments ratio in the goods-producing sectors of the economy provides more evidence that firms are becoming increasingly more sophisticated in managing industry supply chains, maintaining smoother production schedules, and holding smaller inventories and/or accurately projecting actual demand requirements. Figure 4 shows the inventory-to-shipments (IS) ratio for durable goods industries from January 1959 to January 2003. As shown, in the early years the durable goods IS ratio was generally bounded between 1.85 and 2.45, but beginning in 1991 the ratio began a sharp downward descent and averaged 1.51 the last six months of 2002. 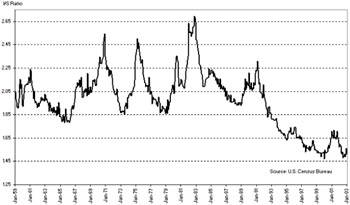 From 1959–1983, the durable goods IS ratio averaged 2.08. Over the next six years, from 1984–1989, the ratio averaged 2.07. For the following six-year period, from 1990–1995, the ratio averaged 1.89 and then fell to an average of 1.59 for the 1996–2002 period. The ratio's steep decline throughout the 1990s occurred as businesses began to utilize new information technologies that helped them squeeze greater efficiencies from their supply chains. Flexible manufacturing, "just-in-time" inventory management and material requirements planning systems, just to name a few ideas, became reality as they were implemented over the Internet (or secure intranets) and allowed manufacturers— particularly durable goods manufacturers—to boost productivity and reduce output volatility.

[3]The analysis presented in Koenig, Siems, and Wynne (2002) is updated here to include available GDP data through 2002:4.

[4]Of course, they are other possible explanations for the economy's increased stability that are not mutual exclusive, such as better monetary policies that have successfully created a low inflation environment, good luck induced stability in final demand, and smaller and fewer price shocks to the economy.