This section describes how to create a console application and introduces you to various files created by the IDE. 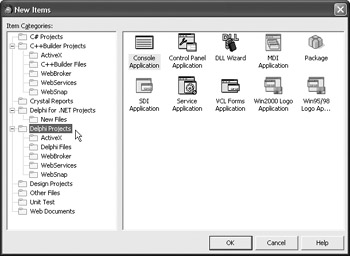 To create a new console application project, you have to select the Delphi Projects node in the Item Categories tree and then double-click the Console Application icon on the right. 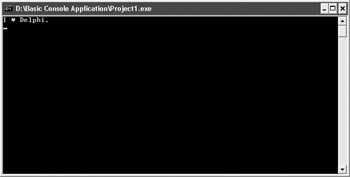 A faster way to create a console application project in Delphi 2005 and newer versions is to select the Delphi Projects category in the Tool Palette window and double-click the Console Application item.

To review files that make up the console application project, we have to save the project to disk. The fastest way of saving the entire project to disk is to use the File ® Save All option or click the corresponding button on the Standard toolbar (the icon with two overlapped floppy disks).

When you select the File ® Save All option, Delphi asks you to enter the name for your project. To simplify things, accept the name Delphi suggests and click Save after you've created and/or selected an empty folder.

The important files that define a console application have the extensions .dpr, .bdsproj, and .cfg. The most important file in every project is the .dpr file — the Delphi project file. The project file contains the essential portions of code that define the project and make it work. When you create a console application project, Delphi automatically displays the project's source code in the editor, as shown in Figure 1-10 on the following page. 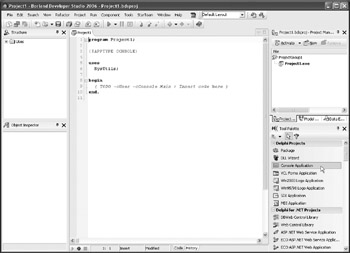 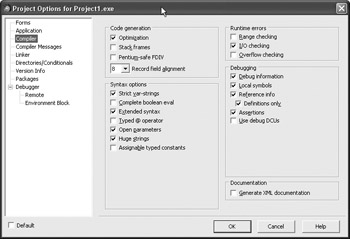 Currently, it makes no difference whether you use Compile or Build to create the executable file. But there is a difference in larger projects that have more than one unit (source code module). When you use the Compile option, only the units that were changed since the last compilation are recompiled. When you use the Build option, however, all units are recompiled, regardless of their last compilation status.

The executable file Delphi created in the compilation process is a fully functional standalone Windows application that can be distributed and run on other machines. The only problem with this application is that it doesn't do much — it actually does nothing. To see how to create an application that does something, turn the page to Chapter 2.