Chapter 1: Getting Started with Delphi

This chapter serves primarily as an introduction to the Delphi IDE and the basics of creating a console application. This chapter doesn't provide you with a detailed overview of all IDE elements but rather describes only those elements that are needed to get you on the right track. Other IDE elements are described later in the book.

The Delphi IDE (integrated development environment) appears when you start Delphi. The Delphi IDE is made up of a number of tools that are used to design, build, and test applications. Figure 1-1 shows the Delphi IDE. 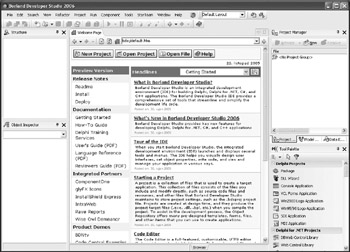 Elements of the Delphi IDE

Even though Delphi contains a vast number of tools for developing applications, only a small number of these are shown at startup. The most significant tools of the Delphi IDE are:

The Tool Palette (previously known as the Component Palette) is a window in the bottom-right corner of the IDE. The Tool Palette is an enhanced version of the Component Palette. It displays a collection of components or files and projects you can create in Delphi. If you are new to programming, it will suffice for now to know that components are the basic building blocks of Windows-based applications. 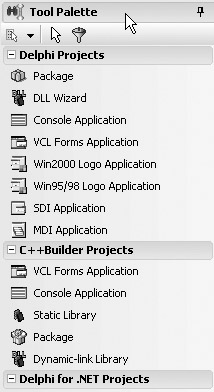 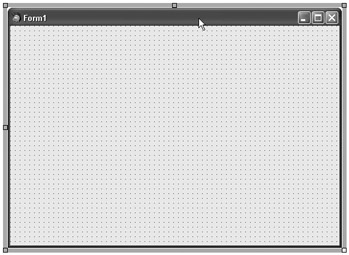 To build a user interface in Delphi, you use the Designer Surface in unison with the Tool Palette and the Object Inspector. Using these three tools, the process of creating a user interface is reduced to three simple steps:

The dots displayed on the Designer Surface are the Designer Grid. The Designer Grid is only visible at design time and is a very useful tool for helping maintain a consistent spacing between components on the form. If you don't need the Designer Grid, you can hide it or disable it in the Options dialog box. To do this, select Tools ® Options, expand the Environment Options and the Delphi Options nodes, and select VCL Designer. Finally, uncheck the Display grid and Snap to grid options. 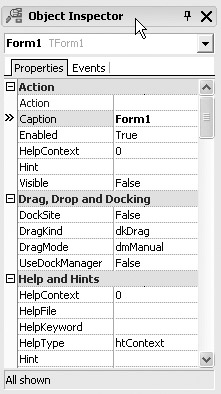 The Object Inspector consists of two parts. The drop-down list at the top is known as the instance list. It lists all components on the selected form (including the form itself) and shows the currently selected component. Below the instance list are two tabs. The Properties tab displays the properties of the selected component, and the Events tab displays the events to which the component can respond. An event is a section of code that gets executed when something happens in your application, and that something is usually a mouse click or a keypress. 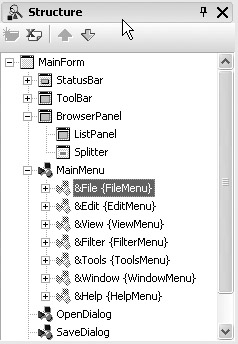 The Code Editor is a very sophisticated tool for entering the code for the application. To display the Code Editor, click on the Code tab in the status bar of the Delphi IDE. 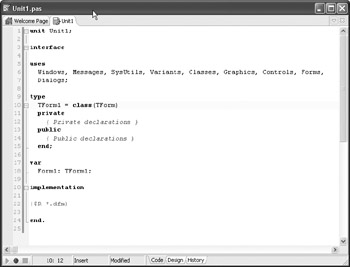 After a better look at the Code Editor, we can see two things: The editor supports syntax highlighting and we can see that because there is already a decent amount of code in the editor. The first is a really good thing, and the second only seems bad if you're a beginning programmer.

The Code Editor in Delphi 2006 is an absolute beauty. Besides syntax highlighting, it has the extremely useful Sync Edit ability, which enables you to simultaneously edit duplicate identifiers in the selected portion of code.

The Project Manager is a window in the upper-right corner of the Delphi IDE that displays the files that make up the current project. The Project Manager also enables us to perform various project-related tasks such as adding/ removing files and compiling. This tool will be really useful when we start building our own components and packages.

Toolbars can be easily configured to better suit your needs. You can customize a toolbar by using the Customize dialog box.

To display the Customize dialog box, right-click on a toolbar and then select Customize from the pop-up menu. 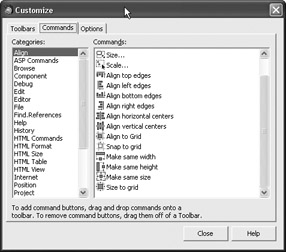