The first system of three-dimensional space allows words to fly about in a seemingly chaotic vortex similar to the way ground debris is encaged within a tornado. Though wild in appearance, this system is actually rather constricted. As you will see during implementation, text within the tornado is not really free to do much more than spin about an axis, constrained within an imaginary cylinder. Still, the effect is rather stunning. Take a look at textTornado.swf . 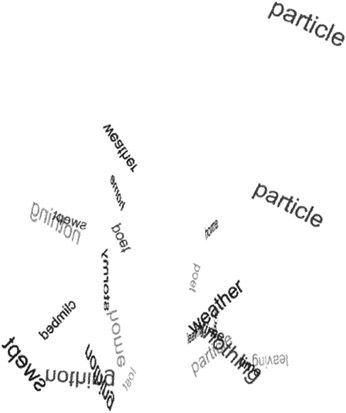 Let's build the tornado from the ground up, beginning with its most crucial elements. As an alternative to typing all this code into Flash, you can follow along using the TextTornado.fla file.

In the following subsections we'll take a look at a couple of modifications to the tornado text movie.

Thus far, the tornado's text is most readable around the outside edges of the tornado. Words that approach the center gradually become thinner until reaching dead center, at which point they appear paper thin. Suppose you want a movie that makes words most visible in the center ”how would you achieve that? In fact, you need only change the code in a few places to create such a system. The file textTornado_center.fla contains the following modifications (again, all the examples are available for download from www.friendsofed.com ).

As another modification, it might be nice to connect each word to the origin of rotation by a single line. This is a theme that will occur again later in this chapter, and with the drawing API features of Flash MX, this kind of thing is both fun and easy to do. These changes have been implemented in the textTornado_line.fla (for more discussion of the drawing API in the context of 3D effects, be sure to check out Chapter 9).

An interesting challenge would be to horizontally flip any word on the left side of the tornado so that all words could be easily readable at all times.