Spherical text magnification refers to a displacement technique that moves letter objects around the surface of a three-dimensional sphere: 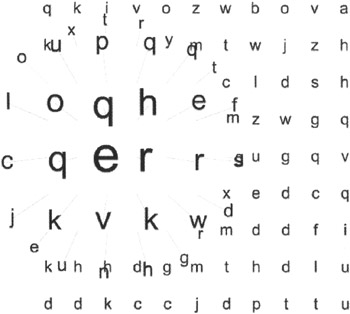 In sphericalMag.fla , the characters continually watch the position of the mouse and determine their own positions based on its proximity. If the mouse is outside a certain "sphere of effect," the character remains unchanged, sitting in its original position. Once the mouse enters the sphere of effect, the character is at first pushed away, then drawn in after the mouse reaches the halfway mark. This process of expansion and contraction is smoothed using a sinusoidal function.

To create this system, you will prototype a reactive letter and instantiate a grid of them. As with the previous project, the motivation to build the movie in this way should be easy to understand: the prototype gives you the fastest performance possible in Flash MX while providing an easy-to-use modular framework.

The effect is a seemingly static field of characters, arranged in a grid. Upon closer inspection with your mouse cursor, the letters jump out of their positions, accelerating around the edge of an invisible sphere until they arrive , magnified, under the position of the mouse. When seen in motion, the behavior is very intuitive, and the process of scanning and reading the information can be quickly mastered.

Again, we'll look at a few different ways of extending this project in the subsections that follow.

Adding a simple function that draws a line to the origin of the movie clip further demonstrates the three-dimensional processes used to move it around (extending the line in the other direction is interesting to look at, but not so useful).

As mentioned earlier, there are two lines in the calculation of the TextNode displacement that you can have a lot of fun with. Keep in mind the calculations used to move the letter around the edge of a sphere, and take a look at sphericalMag_weird.fla . In this file, we have doubled the effect of the lens displacement by including an extra constant of 2: 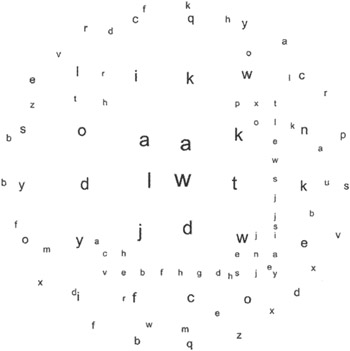 Additionally, including multiples to the calculating of the displacement intensity creates wavy effects. These changes are available in sphericalMag_weird2.fla . To create this file on your own, begin with the original spherical magnification framework, and then change the calculation of lensDisp within the TextNode movie clip to the following:

In essence, this creates a field of text letters where each letter approaches and recedes from the mouse four times after entering the sphere of influence. Moving the mouse about the stage causes quite a stir of computational frenzy. The resulting animation looks like a swarm of letter insects attacking the cursor: 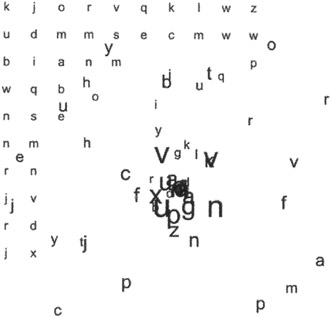