In this final technique, you'll approach the closest approximation of true three-dimensional perspective rendering yet. However, you are still very far from burdening either your processor or your user with the intricacies of full three-dimensional representation. 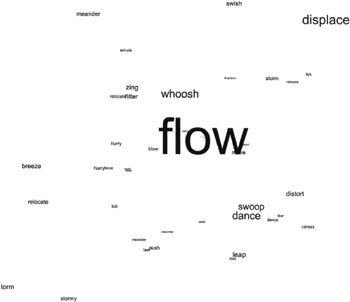 In this system of three-dimensional text, words are fixed in a large spatial area (see textInspace.fla ). Clicking on a word zooms the user through the space to focus on the selection. Words that move beyond the camera are replaced in the distance to create the illusion of infinite depth.

You can trick most users into believing your type exists within a third dimension using only scale and screen positioning. The closer a word is to the user, the larger it becomes. The opposite is true for words far away; they are very small. Words also appear to move faster when they are closer.

Lost in text space is a modification of a parallax system (refer to Chapter 6 for more details). It takes only a few simple equations to set the word object up ”the rest of the algorithmic work will be devoted to ways in which you can move around in this word space. The completed version of this example can be found in this chapter's source files as textInSpace.fla .

Your lost in text space system is now complete. Test your movie ( textInSpace.fla ) and you should immediately see words streaming into the background. Select a word and you should be drawn through the space, focusing slowly on your selection: 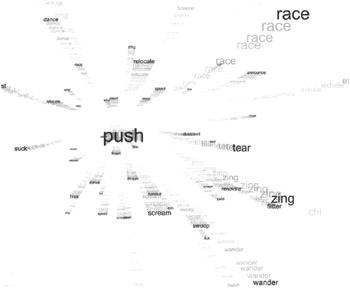 If everything is coming together, you are now flying through space. If you can pull yourself away from clicking around these new planetary text objects, you can continue to develop this system and make it even more interesting.

As a potentially interesting exercise, you might allow your words to move themselves . These modifications exist in a file called textInSpace_floating.fla . For the sake of simplicity, you will allow words to move only along their x- and y-axes. You need only extend the current functionality of the SpaceWord prototype to include a function called float (positioned just after the render function's definition):

Now you must also be sure to call this function. The best way to do this would be a simple function call embedded in the render function, as such:

One potential problem of the free-floating words feature is that the camera is now unable to focus on a moving word. You can fix this problem by writing a small function allowing the camera to track a target. The best place to put this new function is within the loop the camera is already using to move to its destination. As you may recall, this loop is on frame 1 of the main timeline. You simply need a few additional lines of code to reassign the destination if the word has moved (these changes have also been made in textInSpace_floating.fla ):

You also need to append some code in the selection event of the SpaceWord so that the camera knows which word it is focused on. You do this by adding a single line to the constructor function in frame 1 of the SpaceWord definition layer:

The new text system is a bit more irregular as the camera may or may not always be able to keep up with the SpaceWord , but this is how you might expect things to happen in the real world.

One final enhancement you can make to this system involves another trick of the faux-3D trade: fog. In real-world scenarios, fog, or atmospheric perspective, can be a natural indication of distance. The further away an object is, the more the particulate matter in the atmosphere will obscure its visibility. You can simulate this effect with attractive results using the _alpha movie clip property. Introducing fog also eliminates the distracting side effect caused by repositioning words in the distance. Instead of simply popping into existence, each word gradually fades in from the bright white background. This final modification exists in a file called textInSpace_fog.fla .

To add fog, you simply compute some value for _ alpha within your SpaceWord 's render function. The most logical place to place the code is just after the setting of the size:

Though the fog effect does require a significant amount of additional computation, the results, we believe, are worth it: 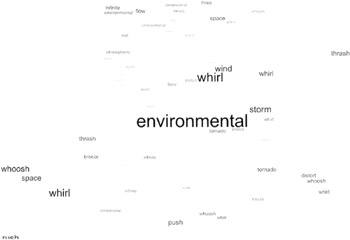