Elements of Light and Shadow

In order to better understand the use of light and shadows to produce realistic graphics, let's take a closer look at the number 4 pool ball: 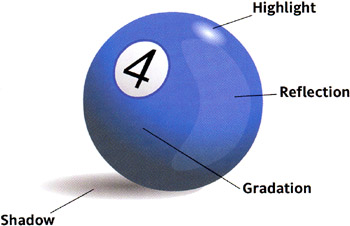 The highlight in this case lets us know that the ball has a smooth, shiny surface. It also tells us the direction of the light source and how far away it may be, which we will need to know later for creating the shadow.

This confirms that the ball is in fact shiny ”this shiny surface reflects objects in the scene. Even though we do not have any actual objects in this scene other than the ball itself, it is implied that the ball is perhaps part of a larger picture. Maybe the ball is sitting on a pool table and we are seeing the reflection of a doorway. Look at the ball a little closer and you'll see!

This leads us to another important point: the subtlety of certain elements that make up an image can work to our advantage. There are lots of things we take for granted on a daily basis when we look at real objects. For example, lighting, color variations, gradients, reflections, and the relation to other objects are all taken for granted and must be included in some combination, be it explicit or implicit, when trying to create believable 3D effects.

The reflection in this ball may not be entirely necessary, but it does add to the believability that this is supposed to be a number 4 pool ball.

This is where the light begins to lose its luminosity and fades to a darker color, creating the shadow. This not only leads to the shadow but also allows us to create some sort of dimension to the object. In this case, the gradient has a bent shape, giving the object the appearance of a sphere or of roundness.

Where the gradation begins on the object is important because it strengthens the idea that the object has a third dimension (also referred to mathematically as a z-axis). It tells us what direction the light source is coming from and maybe how far away it is. With this particular image, however, it is difficult to tell how big the light source actually is ”the light could be very large and very far away or very small and very close to the ball. That's where other objects in the scene can help out.