Before we dive right into the vector 3D world, let's take a moment to examine the key signatures of 3D objects. 3D essentially boils down to a few concepts: perspective, distance, speed, motion, and light and shadow. Without light and shadow, all we see are flat 2D objects, so that's what we focus on in this chapter. Consider the circle at right. 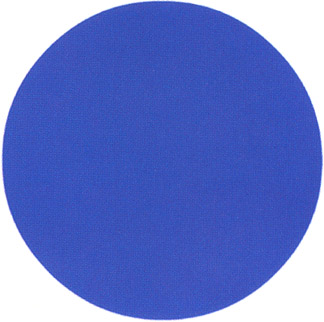 It's just that: a circle. Or could it be a ball? It doesn't look like the kind of ball that we are familiar with. It's just a flat, lifeless, blue circle. Looking at this "ball" we have no sense of placement, depth, or texture, or even the fact that it is indeed a ball at all.

Now let's take a look at that same circle with some texture, light and shadow (see the image at right). 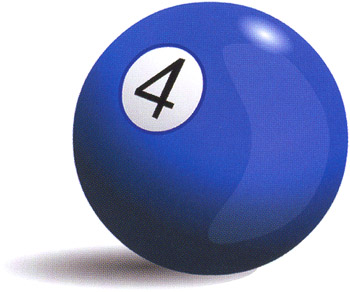 It's obvious that this is the number 4 ball for a pool table. What made the simple blue circle into a shiny blue pool table ball is light and shadow and, of course, the telltale number 4 in a white circle. But more important, the light and shadow really define the ball. The light is coming from the top-right section of the ball, highlighting it. This light produces both the highlight and the shadow at the same time. The area of the ball not getting as much light is obviously darker, and the 3D solid form of our sphere casts a shadow. Looking at the circle, we get a natural sense that it is three-dimensionally spherical. This is because the top half of the circle is lighter than the bottom, but more important because the areas where the darker and lighter parts of the circle meet curve a little.

Now look at the pool ball again, this time with some hints (see the image at right). 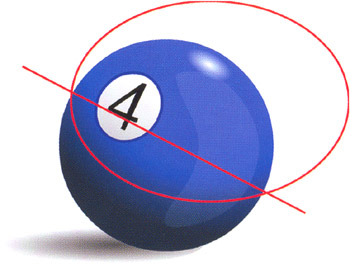 You can see that the shadow does indeed have a slight curve to it, giving us the illusion that it is truly round. This curve in the shadow suggests that the circle has dimension or depth and is a real ball. The additional lines that you see here serve to accentuate the curve of the shadow so you can really see it.

Most objects that we see in the real world have some sort of highlight and lowlight. The highlights are caused by a light source such as the sun illuminating or reflecting off an object. The shadows are caused by places where light cannot reach. This concept seems rather elementary and obvious, but unless you are thinking in terms of 3D you may not have actually thought how important light and shadow are. Let's look at another example before we begin. Look at this beautiful ocean picture taken in Hawaii: 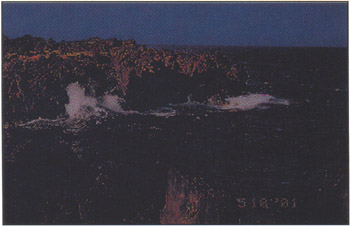 There's hardly anything there! This represents the scene with very little light source.

Here is the same picture again, except with much better light this time: 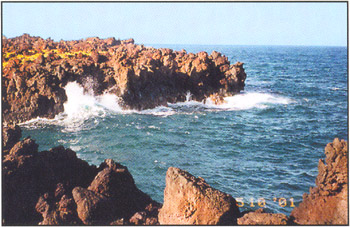 This is a simple but effective explanation of how light is important in creating 3D effects. It's clear this is a picture of a rocky cove with the ocean splashing against it. We know this is the ocean because of the lights and darks of the rippling in the waves. It's obvious that the rocks in this cove are really rough and jagged. We get this visual clue because of where the light shines on the rocks and where it does not. In fact, there are many different visual clues ”the white water splashing against the rocks, for example, and the color of the rocks give the viewer more hints about the perspective and motion of the image. More fundamentally speaking, we wouldn't be able to see any color at all without light.