The GIMP, like other so-called paint programs, creates bitmap (.bmp) images. These are images in which the location and color of every single pixel is recorded. The image is essentially a collection of dots, or bits. The file you create is thus a rather hefty map of these bits (hence its name), and this map tells your system where everything in your image is supposed to go when it is displayed or printed.

Drawing programs, on the other hand, create vector images, or drawings. The vector image file is a collection of mathematical formulae representing the various shapes in your image. This may sound rather unimportant to you, but such drawings have advantages in certain cases. One of these advantages is that vector image files take up less space on your hard disk than bitmaps. Another, and perhaps the most important, advantage is that shapes in vector images retain their smooth edges when the images are enlarged. A smooth circle created as a bitmap, for example, would begin to show jagged edges (the jaggies) when enlarged to any extent, while the same circle in a vector image would remain smooth and round no matter how much you increased its size.

Fedora comes with a couple of programs that are called drawing programs (OpenOffice.org Draw and Dia), but these are really more appropriate for creating simple flyers and diagrams, as you will see later in this chapter. My pick for the easiest-to-use drawing program for creating true graphics is Sodipodi — the name is Estonian for mishmash (see Figure 14-3).

14B-1: Downloading, Installing, and Running Sodipodi

Sodipodi is not included in your Fedora Core system, so you will have to download it and install it yourself. You can get the RPM file by going to http:// dag.wieers.com/packages/sodipodi and then clicking the link for the newest version appropriate for your Linux version. If you added DAG to Synaptic’s list of repositories as I explained in Chapter 10, you can also download the file by running Synaptic, typing sodipodi in Synaptic’s Find box, and then following the standard Synaptic installation procedures. As the file is an RPM with no unmet dependencies, installation is very simple. 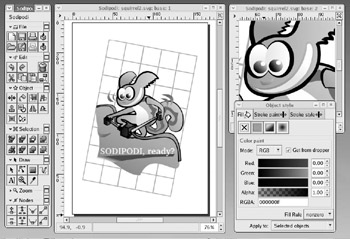 Once Sodipodi is installed, you can run it by going to the Main menu and selecting Graphics > More Graphics Applications > Sodipodi.

If you would like to get a feel for what you can do with Sodipodi, click the Galleries link at the top of the Sodipodi project home page (www.sodipodi.com). You can also find a very nice tutorial on how to use Sodipodi at http://hawthorn.csse.monash.edu.au/~njh/programming/drawing-packages/sodipodi .