This section describes the results of overclocking computers based on the following processors:

Pentium II processors with a clock frequency of 300 MHz operate well in over-clocked modes. Overclocking will be particularly successful if such processors are used with motherboards that have built-in overclocking capabilities. The best motherboards include Abit BX6. This particular motherboard allows very high performance to be achieved.

The following results came from overclocking and testing a computer with a Pentium II 300 MHz processor and an Abit BX6 motherboard. Overclocking parameters were set using BIOS Setup in CPU SoftMenu II.

In the course of overclocking, the system-bus frequency was raised from 66 MHz to 100 MHz. As a result, the processor frequency was increased 1.5 times, from 300 MHz to 450 MHz. To ensure stable operation, the core voltage was raised from 2.00 V to 2.10 V. To retain control over the system, the system temperature was monitored constantly, using the System Temperature parameter in the CHIPSET Features Setup menu. Before overclocking, the temperature was 41°C (106°F); after this procedure, it was 42°C (108°F). 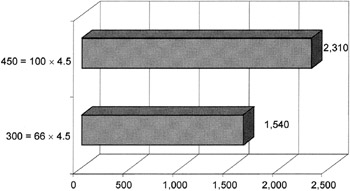 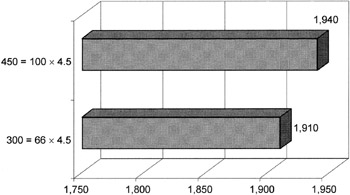 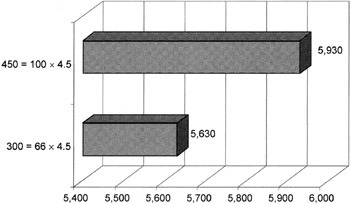 With some motherboards that support higher frequencies of the host bus (such as 92 MHz or 95 MHz), it was possible to overclock this processor to 460 MHz. However, at these frequencies, additional cooling of the processor and other hardware components is required.

Processor overclocking was accomplished by raising the system-bus frequency from 66 MHz to 95 MHz. At system-bus frequencies of 83 MHz, 92 MHz, and 95 MHz (relatively high for products of this class), computer operation was unstable. At frequencies of 92 MHz and 95 MHz, the system often hung up during the tests, even with an improved cooling system. It was possible to ensure stable operation of the system only by increasing the CPU core voltage 0.1 V.

WinBench 98 was used for testing. 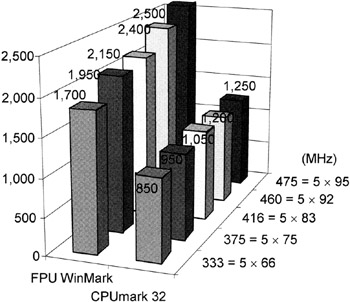 As usual, when overclocking the processor, it is necessary to carefully consider efficient cooling.