Run the class from the Run menu of the Eclipse main menu bar.

q 10.6(a) Select the HelloHSQL class by left-clicking on it.

q 10.6(b) From the Run tool, select Run As/Java Application. 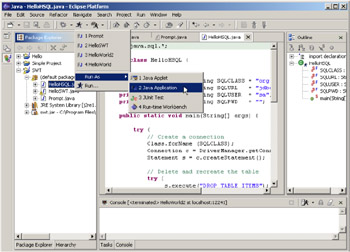 This will create a launch configuration for HelloHSQL with the default characteristics and then attempt to run it.

Once again, you won't meet with a lot of success, as you can see in Figure 10.26. And even though the console view is rather small, the error is pretty compact and very concise : ClassNotFoundException: org.hsqldb.jdbcDriver. 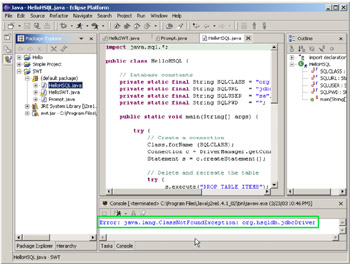 Figure 10.26: Blue text is system console output ”this is your own error routine and it shows that you're missing HSQLDB's JAR file.

This is actually a very common error during JDBC programming, and it just means that you haven't yet added the SQL engine's JAR file to your classpath, which you can do immediately. 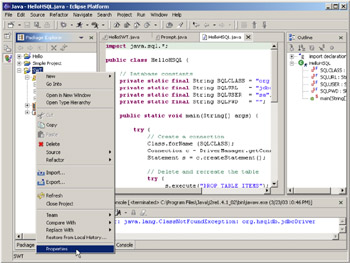 Figure 10.27: Using the popup menu to access the properties dialog for the SWT project.

The classpath is on the Java Build Path properties sheet, under the Libraries tab. You should already be there, but if not: 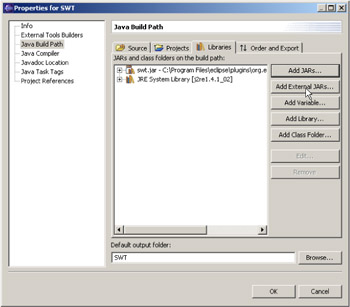 A standard file finder dialog will appear. It will probably be in the win32 folder; that's the last folder you imported a JAR file from. 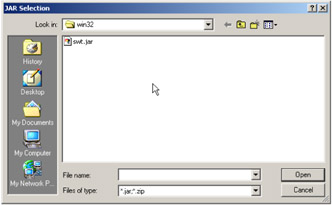 Navigate to where you installed HSQLDB in Step 10.1. 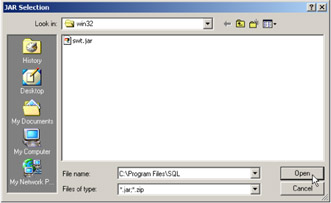 Next, open the HSQLDB folder (which should be named hsqldb). 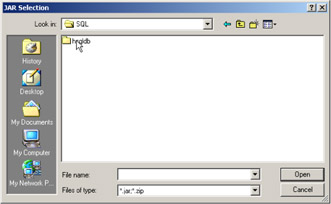 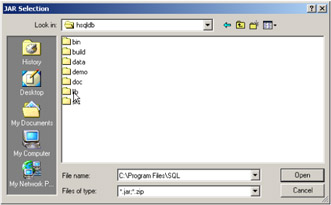 Now you will have reached a point where you see a JAR file named hsqldb.jar. This is the JAR file that you want to include on your classpath. 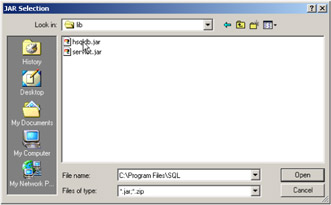 Figure 10.33: Open hsqldb.jar, which includes it in the classpath.

You'll see that the JAR file has been added to the Libraries tab. Just click OK to continue. 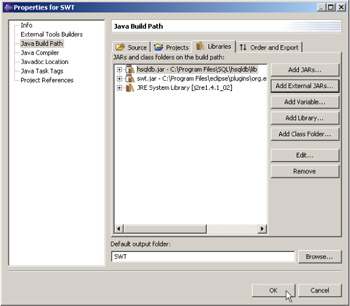 Your workbench should now look like the one in Figure 10.35. Interestingly, there are still some warning messages. But if you'll look closely, you'll see that while you got rid of all the errors for HelloHSQL, the old warnings for HelloSWT popped up again. This could be a little confusing, so always watch this list carefully . 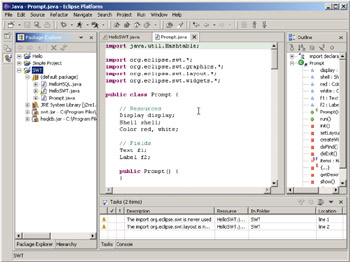 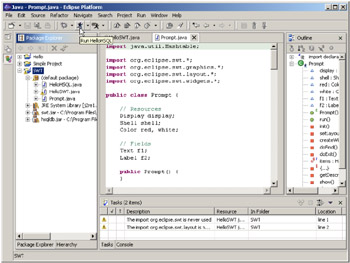 Figure 10.36: Hitting the run tool reruns the last application, which in this case is HelloHSQL.

You will see the screen below. Notice that records for DOG, CAT, and OCTOPUS have all been entered. Congratulations! 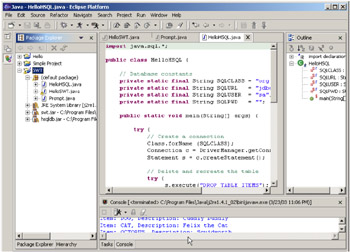 Figure 10.37: Output from the HelloHSQL class.

This is the standard import command for JDBC programs; it defines the primary JDBC classes such as Driver, Connection, and Statement.

This is standard code for any runnable Java application.

These are the JDBC constants. I go into them in some detail in Step 10.5. In general, the class and URL are determined by the SQL engine vendor, while the user ID and password are up to you. In this particular case, however, the user ID "sa" is a special user ID for the HSQLDB product ”it will initialize the database if it does not already exist. So please don't change this code unless you're very comfortable with what you're doing.

Note that all of the SQL code is inside a try/catch block. This is the standard Java technique for checking for errors in called methods . The called method will "throw" an exception, and the calling method will "catch" it. This technique is very powerful, but it can sometimes lead to complicated code (an example of which I'll show you in a moment). This particular try block, however, is pretty straightforward ”it encompasses all the code in the main method; the catch is at the bottom of the code.

This code is very standard, although it's not exactly intuitive. The Class.forName() call causes a static initializer to be invoked, which registers the driver. For my tastes, this is a "clever" technique, and "clever" is not a compliment. In programming, "clever" code usually indicates code that is nonintuitive and may be easy to misunderstand. The only saving grace is that every JDBC vendor does this, so once you learn this particular technique, you'll find that it applies to every JDBC a pplication.

After that, the code simply creates a Connection, which represents a communication session with the host, and a Statement, which is used to execute SQL requests and return result sets when appropriate.

Up until this point, the code for every JDBC application is the same, or at least similar. There may be some minor differences as to runtime attributes or perhaps some slightly different code to take advantage of connection pooling, but in general, the idea is always the same: Instantiate the driver, open the connection, create a statement.

This is the start of the application-specific code. The DROP command is used to delete an SQL table, while CREATE builds a new one. This is pretty low-level code, and wouldn't normally be part of a day-to-day application, but since you're starting from scratch, you're going to have to create the table sometime, and you may as well do it in a program ”this tests that you have everything installed properly.

Take a close look at the line that executes the DROP command. You'll notice that there is a try/catch block around it. That's because the DROP is going to fail the first time you run this program (the table won't exist yet!), and the primary way that JDBC reports errors back to the user for these types of commands is through exceptions. Since the code is already inside a try/catch block, the not-found error would cause the program to end. So instead, I've put a nested try/catch block around just the DROP command. In this block, I ignore any errors. In a production application I would only catch for SQLException and verify that the error is "Table Not Found". If it wasn't, I'd throw the error to the higher level try/catch.

These statements populate the table using the standard JDBC1 syntax. In JDBC1, all commands other than the SELECT statement are run using the execute method. JDBC2, on the other hand, allows more traditional record-based access, where you can position yourself in a file, update fields and then rewrite a record.

HSQLDB doesn't support the more powerful JDBC2 syntax. If you look through the SideStep, however, you'll find some examples of code that does take advantage of JDBC2. The SAPDB and the JTOpen drivers both support JDBC2.

At the end of the day, you need to clean up. This is especially important in distributed systems; not performing the appropriate shutdown steps can leave connections open and waste resources on the host. Always close your statement and your connection.

(In fact, you should probably use a finally clause in your try/catch block to shut down the connection if anything goes wrong, but that's a little bit outside the scope of this particular program.)

Here's the standard catch block. I'm not doing anything fan ”I just print the error message.

And finally, good Java programming practices dictate that an application always ends with System.exit(0). That's it for this program.

The CISSP and CAP Prep Guide: Platinum Edition
Interprocess Communications in Linux: The Nooks and Crannies
CISSP Exam Cram 2
Inside Network Security Assessment: Guarding Your IT Infrastructure
A+ Fast Pass
The Java Tutorial: A Short Course on the Basics, 4th Edition
InDesign Type: Professional Typography with Adobe InDesign CS2
flylib.com © 2008-2017.
If you may any questions please contact us: flylib@qtcs.net
Privacy policy
This website uses cookies. Click here to find out more.
Accept cookies