Simulation Game: The Survival of the Fittest

The time period for this simulation game is the Ice Age. Homo erectus, or the “upright man,” lived around one million years ago (1.5 million B.C.). Then 200,000 to 250,000 years ago, the Neanderthal (or Neandertal) appeared. Around 25,000 B.C. the Cro-Magnon man became the fittest species. In my research, I decided to include Homo erectus in the design for the initial migration from Africa to Europe and Asia and for their primitive lifestyle.

Similar successful products would be the Deer Hunter series and the hundreds of products that mimicked it, as well as The Sims, since in this game you’ll be monitoring and making decisions for tribe or clan members for several generations. 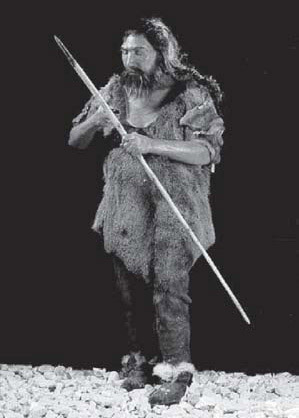 Neanderthal man, reconstructed from a skull found in Amud, Israel. Used with permission from the Neanderthal Museum, Mettmann, Germany (www.neanderthal.de.)

Comments on competing hunting games are:

Good: Actual animal sounds, realistic 3D animations and graphics, true-to-life animal behavior and weather conditions. The game captures the essence of the outdoors. Accurate AI, and the animals react to the hunter’s sounds and scents. The ability to customize the input keys and option settings. The game ran well on an average computer.

Bad: Difficult to see the animals’ tracks. Sounds were repetitious and did not have much variety.

Homo erectus appeared 1.5 million years B.C. and traveled from Africa to Europe and Asia. They were the first hunters and gatherers with primitive weapons like stone axes and knives. They lived in the midst of the Ice Age, so traveling across bodies of water was as simple as crossing a vast terrain of frozen, natural ice bridges. Homo erectus traveled in search of food in the frozen desert after the animals in Africa either headed north or became extinct. They had the skills to make fire. Fire was an important key to life since it protected them against wild, hungry animals that feared fire, gave the tribe heat when traveling through cold regions, and allowed them to cook their food, killing possible diseases and softening their meat. The elders could share stories around the fire.

Homo erectus had a large face, a thick skull, a large, powerful lower jaw, and a receding forehead. They could grow to 5'9" and often lived in caves. They traveled over 8,500 miles from Africa to Europe or China (8,700 miles) in over a million years, following the herds that moved northward seasonally.

A clan was comprised of 6 to 25 members. Males lived to ages 40 to 45, while females, many dying in childbirth, lived to 30. Clans often stole women from neighboring clans. Neanderthals were cave dwellers. The men hunted within their 30-mile territory. Since they lacked in-depth planning, they hunted in zigzag paths after their prey. Neanderthals cared for their wounded and disabled members and buried their dead in a ceremony where they painted the deceased body.

Neanderthals made elaborate use of stone tools. They had hand axes for skinning and cutting game into pieces and choppers for breaking bones to eat the marrow, pound meat, and chop wood. Deniculates could shape and remove bark from wood. Scrapers could clean hides. Curved-back knives could cut flesh easily. Spears were cut with pointy ends, or stone points were placed at the end of the spear. Neanderthals made wooden clubs. They used bones for needles and fishhooks. They could craft warm boots and make a fire by spinning a pointed stick with kindling.

Cro-Magnon man, or “Homo sapiens sapiens,” lived around 25,000 B.C. and followed their food throughout the seasons. In winter they returned to their shelters while in summer they traveled, following the herds. Like their ancestors, they ate seeds, berries, roots, nuts, and salmon. They sweetened their foods with honey.

Cro-Magnon man could grow to six feet tall and could live into their 50s. They had a huge frontal lobe and could plan ahead. They hunted in groups or individually. They had stone axes, knives, spears, harpoons, wooden bows, and sharp stone-tipped arrows. They used traps and fished with woven nets. They built rafts and canoes to catch larger fish in the deeper waters. 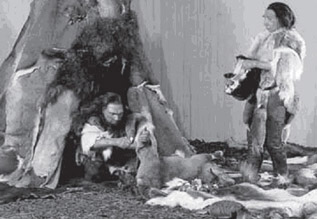 Cro-Magnon man learned how to soften leather and use animal gut as thread and bones as needles. In summer they wore woven grass and bark clothes. In winter they wore animal skin clothing and moccasins. Their homes were portable and made like teepees. The teepees were made with branches or mammoth bones and covered with animal skins. Often the large home had a central hearth for a fire. Cro-Magnon painted and tattooed their bodies, perhaps as a sign of social position. They had flint blades and oil lamps.

They created statues out of ivory, bone, and antlers. They made colored cave paintings that depicted hunts and animals (stick figures), and they often had outlines of the artist’s hands. They made necklaces and pendants from shells, teeth, feathers, flowers, and bone.

They ate and were hunted by the same animals as the Neanderthals, except the woolly mammoth and saber-tooth tiger were then extinct. Cro-Magnon man could store and cure food.

From this information, gameplay starts to run through your mind. Thousands of Homo erectus tribes leave Africa in search of food (herds) and travel over 8,500 miles into Europe and Asia (think both solo and multiplayer versions). During the journey, they must hunt with their primitive weapons and seek shelter (ideally a cave). Gamers will have the Homo erectus tribe perform daily duties (hunting, cooking, and seeking and making shelter and clothing) through 10 to 15 generations (depending on skill level). The Homo erectus tribe must not become extinct.

Upon successfully arriving at the tribe’s final destination, Europe or Asia, Neanderthal clans of six members will emerge as the gamer’s new tribe, and gameplay will continue through six to eight generations (depending on skill level) with the clan’s membership reaching 25 members. Then Cro-Magnon man dominates the Earth and, through a more advanced intelligence and tool skill, is able to hunt better, survive the environmental conditions, and create art.

Gameplay in The Survival of the Fittest will have the clan or tribes hunting for food and skins with their era’s primitive weapons. As the group is hunting, predators will be hunting them. Another possible scenario is a saber-tooth tiger or a ten-foot-tall cave bear will enter the cave when the clan is sleeping and attack them (another variation of being hunted). This aspect of the hunters being hunted adds to the simulation’s realism and has the gamer using a carefully planned, cautious strategy throughout the game to keep the clan alive and healthy.