This section looks at how to install remote debugging and at some of the choices that you need to make during the installation process.

Figure 15-2 shows how you can choose which of the three transport protocols you wish to use when attaching to a remote process from the Debug ’ Processes window. Obviously, you need to choose the default DCOM protocol if you're going to be doing any remote debugging of managed code. 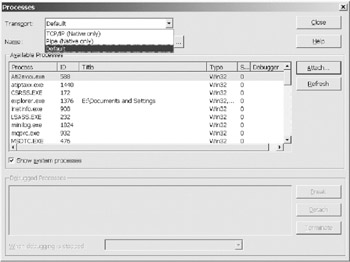 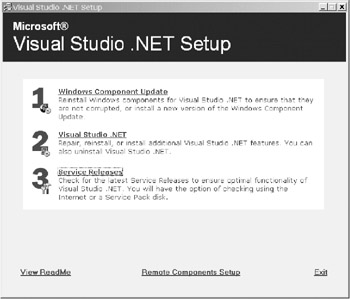 If you wish, you can opt to install just the remote components needed for debugging native Win32 programs. These are programs written using unmanaged languages such as VB.Classic and C++. The minimum components needed for remote native debugging are msvcmon.exe, msvcr70.dll, natdbgtlnet.dll, and natdbgdm.dll. If you're doing remote debugging under Windows NT, you'll also need psapi.dll, and if you need debug dump support, you'll need dbghelp.dll as well. Figure 15-4 shows the option to install native remote debugging only. 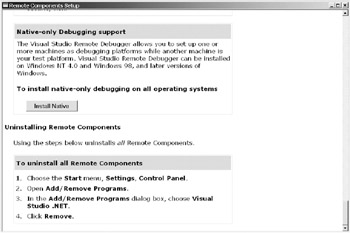 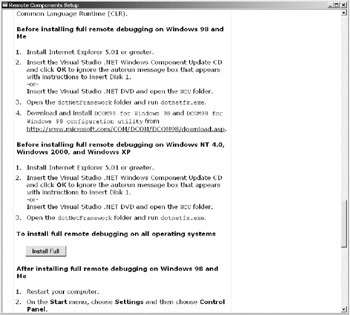 Note that each version of the operating system has its own unique instructions. For instance, when you install remote debugging on Windows ME or Windows 98, you'll probably need to install and configure DCOM because it's not installed by default on these operating systems.

In this section I discuss the restrictions that you might encounter when using remote debugging. Most of these restrictions aren't lethal, but a couple of them can be rather troublesome . This first list includes the three most common restrictions:

The next list includes some security restrictions imposed by the Visual Studio debugger. As noted after the list, these restrictions can be overcome by setting a registry key on the remote machine.

Creating or modifying the following registry key on the remote machine can overcome these security restrictions:

This registry key should be set to a DWORD value of 1 . In addition, for the last two security restrictions in this list, you need to have an administrator logged into the remote machine during the debugging session. This is an added security measure required by the Visual Studio debugger.