Some games like Project Gotham Racing would fall into more than one category. They are more realistic than street racers, but they are not really as much of a simulation like Grand Tourismo or Formula One because you can also tune your cars and you drive through streets. Need for Speed, on the other hand, is no longer realistic; you can’t crash your car, no matter how fast you drive into a wall, and you can drive over other cars, escape the police, damage public property, and so on. The game falls much more in the underground and street racer aspect.

The next sections take a quick look at some racing games that fall into these genres that exist and that could be implemented with the XNA Racing Game engine.

Most realistic racing games like this one are for some reason PlayStation games like Gran Tourismo, Formula One, Enthusia Professional Racing, Colin McRae Rally, and many more. Most games are also available on the PC platform, and sometimes also on the Xbox platform, but not often. You will find a lot more street racers and fun racers on the Xbox than on the PlayStation.

Anyway, I do not know much about these games and I usually fall asleep before completing the first lap. Better ask my brother about details here. I can just leave you with a nice picture of Gran Tourismo (see Figure 12-2). 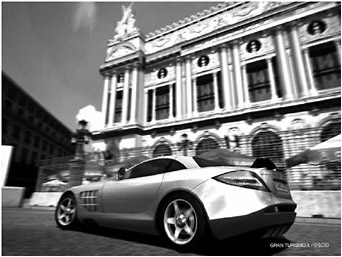 For the Xbox 360 the most popular game in this category is probably Project Gotham Racing, which is a little fun to play thanks to the additional street racer angle of the game, but even here I do not get very far; after a couple of missions it is always the same over and over again. But I must say that the game is done very well and I would expect that the other classic racing games also evolve a little bit into street racer style of games since the recent popularity. And it is obviously more fun to have some additional game modes instead of just driving around in circles, but hey, that’s what racing games are all about.

Need for Speed is an extremely popular game by EA Sports and many versions of the game exist. I can’t count them all, so I will not even bother. The latest two games are Need for Speed Underground (2005, see Figure 12-3) and Need for Speed Carbon (2006). Usually all Need for Speed games come out for all the latest console platforms and even for the PC, which makes them less of a system seller, but nevertheless an incredibly well selling game over all platforms combined. 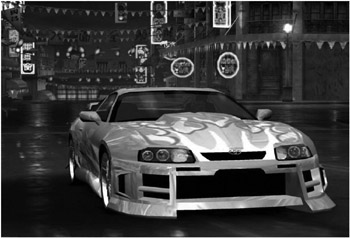 Games like these have great graphics and also a lot of details in the background. Additionally you get some extra game modes and bonus points for drifting around or achieving special tricks. You are also able to tune your car, paint directly onto it, or apply stickers, which is highly anticipated by the car tuning scene.

And finally there are the fun racers where I choose Trackmania to represent them all. I will leave the crazy racing games out because they are often not a pure racing game, but more like a mixture between a shooter and a racing game.

In Trackmania (see Figure 12-4) you have to reach the finish line, but there are several checkpoints at which you can see your current time and whether or not you improved since the last time you passed this checkpoint. It is not always easy to reach the goal and sometimes tracks are only as long as a few seconds, but the game is designed in a way that you constantly want to beat your own times or your opponents’ times if you play together with some friends in a multiplayer game. You often reach the bronze medal, but you also want the silver or gold medal for this track, which can only be achieved by driving 1–2 seconds faster than before. And after a while you see yourself playing the same track 30 times just to get that extra second. It is a highly addictive and very successful game for its genre. 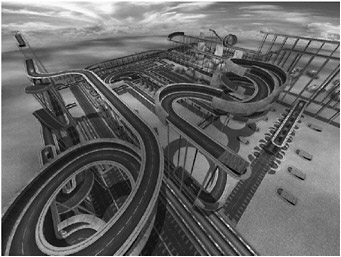 Other than the basic game principle the tracks are really defining Trackmania. You don’t see many games with that many loopings and opportunities to fly around in the level with your car or driving up walls just to fall into the right spot somewhere else. The levels are also very different and you could play Trackmania just for a few minutes to test out a track or even for hours trying to solve all singleplayer tracks.

Let’s talk about the direction your racing game is going to be. Before the street racers became popular it was either realistic games or fun games and I always liked the fun games much more because just driving a car like in Test Drive was always boring to me. But many people like the realistic racing games. My little brother is a great fan of all realistic and street racing games, or else I would not know anything about them at all except for seeing them in magazines or at game fairs.

Anyway, the racing game I want to develop is more like a fun racer because creating realistic graphics is really hard. It is ok to mix in a little bit of the street racer and underground racer genres, but only to make the game look and sound cooler. The game principle I liked the most recently is Trackmania, which just lets you drive through crazy tracks with loopings, ramps, holes in the road, and so on. The game principle is still to get to the finish line as fast as possible, but I like the fact that getting there becomes a lot harder. Just driving slowly forward will not get you through any loopings or above certain ramps. And if you fall out of the track you have to start over. It is much more like an arcade game than an old-fashioned racing game driving in circles.

The recent release of Trackmania (Sunrise and Nations) also has great graphics. They may not be as good looking or realistic as the other racers mentioned here, but that does not matter so much for a fun racer like this one. Some of the techniques used are still very nice and a game like Trackmania has to solve many difficulties like handling so many road pieces and seeing far into the level. In games like Need for Speed or Project Gotham Racing you hardly see ever more than the current road piece plus the next curve.

You are going to face the same problems, and therefore I want to make sure that both the landscape rendering and the track rendering is as fast as possible and that you can optimize landscape objects to skip away if a certain frame limit is reached.