If you want the sound on your computer to be more than the speaker on your PC going “bing” occasionally, you must have a separate sound card or one built into your computer’s motherboard. Games are a reason to add a sound card, if the games rely on sound effects or other audio cues. Also, sound cards let you play music and communicate on the Internet using a variety of communications tools.

Most modern PCs include a sound card, often integrated into the motherboard. In the rare case that one isn't included (or the slightly more common case where it isn't supported in Linux), you can add a supported sound card starting for only a few dollars.

Sound drivers provided in Linux come from many sources, including a project that no longer exists: Open Sound System/Free (OSS/Free). However, the Advanced Linux Sound Architecture (ALSA) is the sound system that is integrated into the 2.6 kernel that comes with Fedora Core 3. The older OSS drivers are useful if ALSA does not support your sound card.

The devices that the audio programs use to access audio hardware in Fedora include:

During the first start-up after you install Fedora, the Firstboot setup agent tries to detect and configure your sound card. If that process was successful, you can skip this procedure. If your sound card wasn’t detected or if you add a card later, here are a few things you can try:

At this point, you can try playing an audio file. Insert a CD and open one of the CD players described in the following section.

The player that pops up automatically when you insert a CD (on the GNOME desktop) is the gnome-cd player. However, several CD players that come with Fedora Core can be used to play CDs. Here are your choices for playing CDs with Fedora Core:

If you prefer to use a player other than gnome-cd, you can disable automatic startup of gnome- cd by disabling automatic play in your Drives and Media Preferences window or having a different application launched to handle CDs (as described in the next section).

When you put an audio CD into your CD-ROM drive, a CD player (gnome-cd) automatically pops up on your desktop and begins playing the CD. If you are using the GNOME desktop, you can thank the GNOME Volume Manager. The GNOME Volume Manager monitors your CD-ROM drives (as well as your other removable media, such as DVDs and digital cameras) and opens a CD player when it sees an audio CD.

If you are unable to play CDs on your CD-ROM drive, here are a few things you can check to correct the problem:

Like most graphical CD players, the gnome-cd player has controls that look similar to what you would see on a physical CD player. If you are using the GNOME desktop, from the System Menu select Sound & Video ® CD Player, or from a Terminal window, type:

If your computer is connected to the Internet, then for most CDs, you’ll see the title and artist information. Even obscure artists are represented in the free online databases. If the information isn’t available, you can enter it yourself. 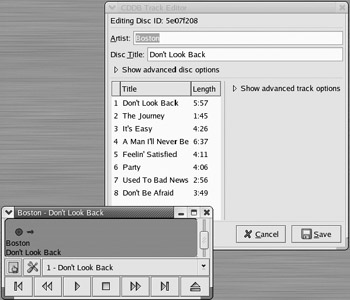 If you are working from a dumb terminal or just don’t have your X desktop running, you can run the cdp utility (which comes with Fedora) to play CDs. I don’t suggest running this utility from a Terminal window; it doesn’t display properly. First, insert the music CD you want to play. Then, to start cdp, at a shell prompt type:

You should see a blue screen containing the cdp display. If instead of starting on the first track you want to start on another track (for example, track 5), type:

When cdp starts, you can see all the tracks, how long each track plays, and total play time. To control the play of the CD, use the following controls (turn on Num Lock to use these numbers from the numeric keypad):

The cdp display also lets you enter the names of the artist, CD, and each song. Because this information is saved, you can see it each time you play the CD. Type these commands while the cdp display is showing to edit information about the CD currently playing:

Rhythmbox provides the GNOME music player that lets you do everything, at least according to the Rhythmbox documentation. You can play music files, import music from CDs, and play Internet radio stations, all from one interface.

The first time you run Rhythmbox, the program displays a set-up wizard. You can tell Rhythmbox where you store your music files with the wizard dialog shown in Figure 8-3. 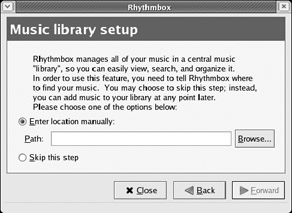 Figure 8-3: Defining where you store your music. 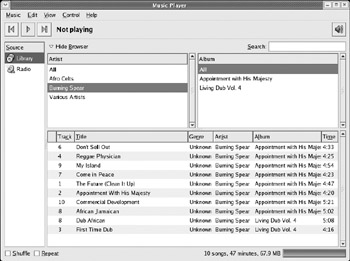 In addition to playing music files, Rhythmbox can launch Sound Juicer to rip CDs (see the section on Ripping CDs with Grip for more on ripping CD audio). Rhythmbox can also play Internet radio stations. The easiest way to do this is to find a streaming radio station (you want to look for Shoutcast PLS files, usually with a .pls extension). Save the PLS file, and then double-click on the file in the Nautilus file browser. Nautilus comes configured to launch Rhythmbox for playing audio. Figure 8-5 shows Rhythmbox with three Internet radio stations. 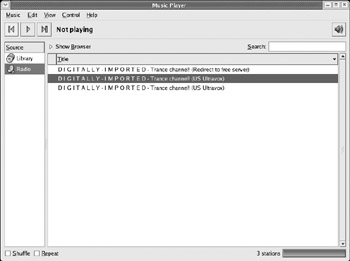 The XMMS (X Multimedia System) Audio Player provides a graphical interface for playing music files in MP3, Ogg Vorbis, WAV, and other audio formats. XMMS has some nice extras too, which include an equalizer, a playlist editor, and the ability to add more audio plugins. If the player looks familiar to you, that’s because it is styled after the Windows winamp program.

Figure 8-6: Play Ogg Vorbis and other audio files from the XMMS playlist.

You can get many more audio plugins from xmms.org. The XMMS Audio Player can be used in the following way:

The small window in the center/top of the Equalizer shows the sound wave formed by your settings. You can adjust the Preamp bar on the left to boost different levels in the set range.

The Playlist Editor lets you put together a list of audio files that you want to play. You can add and delete files from this list, save them to a file, and use them again later. Click the PL button in the XMMS window to open the Playlist Editor.

The Playlist Editor allows you to:

There is also a tiny set of buttons on the bottom of the Playlist Editor screen. These are the same buttons as those on the main screen used for selecting different tracks or playing, pausing, stopping, or ejecting the current track.

MIDI stands for Musical Instrument Digital Interface. MIDI files are created from synthesizers and other electronic music devices. MIDI files tend to be smaller than other kinds of audio files because, instead of storing the complete sounds, they contain the notes played. The MIDI player reproduces the notes to sound like a huge variety of MIDI instruments.

There are lots of sites on the Internet for downloading MIDI files. Try the Ifni MIDI Music site (www.ifni.com), which contains songs by the Beatles, Led Zeppelin, Nirvana, and others organized by album. Most of the MIDI music is pretty simple, but you can have some fun playing with it.

To start kmid, type kmid & from a Terminal window.

There are many different formats for storing and compressing speech and music files. Because music files can be large, they are typically stored in a compressed format. While MP3 has been the compression format of choice, Ogg Vorbis is quickly becoming a favorite format for compressing music in the open-source community. Ogg Vorbis has the added benefit over MP3 of not being encumbered by patents.

Tools that come with Fedora for converting and compressing audio files include:

If you have a sound file in one format, but you want it to be in another format, Linux offers some conversion tools you can use to convert the file. The sox utility can translate to and from any of the audio formats listed in Table 8-1.

If you are not sure about the format of an audio file, you can add the .auto extension to the filename. This triggers SoX to guess what kind of audio format is contained in the file. The .auto extension can only be used for the input file. If SoX can figure out the content of the input file, it translates the contents to the sound type for the output file you request.

To see what sox is doing, use the -V option. For example:

You can apply sound effects during the sox conversion process. The following example shows how to change the sample rate (using the -r option) from 10,000 kHz to 5,000 kHz:

To reduce the noise, you can send the file through a low-pass filter. Here’s an example:

For more information on SoX and to get the latest download, go to the SoX — Sound eXchange — home page (http://sox.sourceforge.net).

The oggenc command takes music or other audio data and converts it from uncompressed formats (such as WAV, raw, or AIFF) to the compressed Ogg Vorbis format. Using Ogg Vorbis, audio files can be significantly reduced in size without a noticeable loss of sound quality. (Using the default settings in oggenc, I reduced a 48MB WAV music file to 4MB.)

In its most basic form, you can use oggenc with one or more WAV or AIFF files following it. For example:

This command would result in all files ending with .wav in the current directory converted to Ogg Vorbis format. An Ogg file is produced for each WAV file, with oggenc substituting .ogg for .wav as the file suffix for the compressed file. Ogg Vorbis files can be played in many different audio players in Linux, including the XMMS player (described earlier).