Setting up and configuring the X Window System to your liking is the hard part. By comparison, using X to run applications is relatively easy. If you have used Microsoft Windows operating systems, you already know the most basic ways of running an application from a graphical desktop. X, however, provides a much more flexible environment for running native Linux applications.

Starting applications from a menu

To run applications on your own desktop, most X window managers provide a menu, similar to the Microsoft Start menu, to display and select X applications. Applications are usually organized in categories. From the GNOME or KDE desktops in Fedora Core, open the red hat menu, select the category, and then select the application to run. Figure 5-1 shows an example of the Fedora Core Applications menu and the Sound & Video submenu. 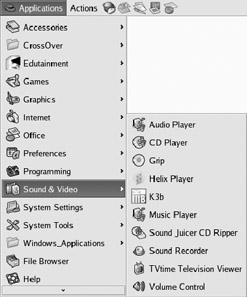 Not all installed applications appear on the menus provided with your window manager. For running other applications, some window managers provide a window, similar to the Run Application window, that lets you type in the name of the program you want to run.

Starting applications from a Terminal window

When you have found an application and figured out the options that you like, you can add it to a menu or a panel (if your window manager supports those features). In that way, you can run a program exactly as you want, instead of the way it is given to you on a menu.

Here is a procedure to run X applications from a Terminal window:

You should try running a few other X commands. A couple of old X commands you might try are xeyes or xcalc.

X lets you start an application from anywhere on the network and have it show up on your X display. Instead of being limited by the size of your hard disk and the power of your CPU and RAM, you can draw on resources from any computer that gives you access to those resources.

Think about the possibilities. You can work with applications launched from any other computer that can run an X application — from a small PC to a supercomputer. Given the proper permission, you can work with files, printers, backup devices, removable drives, other users, and any other resources on the remote computer as though you were on that computer.

With this power, however, comes responsibility. You need to protect the access to your display, especially in networks where the other machines and users are not known or trusted. For example, you wouldn’t want to allow anyone to display a login screen on your display, encouraging you to inadvertently give some cracker your login and password.

Traditionally, to run remote X applications, you basically only need to know how to identify remote X displays and how to use whatever security measures are put in place to protect your network resources. Using ssh to launch X applications is even simpler and more secure than the traditional method. Those issues are described in the following sections.

If there is an X application installed on another computer on your network and you want to use it from your desktop, follow these steps:

When you run an X client on your local system, your local display is often identified as :0, which represents the first display on the local system. To identify that display to a remote system, however, you must add your computer’s host name. For example, if your computer were named whatever, your display name would be:

You will probably use the display name in this form most of the time you run a remote X application. In certain cases, however, the information may be different. If your computer had multiple X displays (keyboard, mouse, and monitor), you may have numbers other than :0 (:1, :2, and so on). It is also possible for one keyboard and mouse to be controlling more than one monitor, in which case you could add a screen number to the address, like this:

This address identifies the second screen (.1) on the first display (:0). The first screen is identified as .0 (which is the default because most displays only have one screen). Unless you have multiple physical screens, however, you can skip the screen identifier.

There are two ways to identify your display name to a remote X application:

You need to remember some things about the remote application that appears on your display:

There are several different traditional methods available to prevent just any X application from appearing on your display. Each method offers a different level of security, as well as different amounts of setup. The major security methods that are supported include:

There are other X security methods that are also based on storing one or more randomly generated keys in the .Xauthority file. XDM-AUTHORIZATION-1 uses a two-part key — a DES encryption key (56-bit) and some random data (64-bit) — to enable access. When a system supports secure RPC, the SUN-DES-1 method can be used to enable access by setting up public and private key pairs that can be validated on a per user basis. Finally, the MIT-KERBEROS-5 method enables both the X client and X server to validate each other (using a Kerberos trusted third party).

Not only does the ssh command provide a secure mechanism for logging in to a remote system, it also provides a way of securely running remote X applications. With X11 forwarding turned on (it is off by default in Fedora Core 3), any X application you run from the remote location during your ssh session will appear on your local desktop.

After you log in to the remote computer using ssh, you can use that secure channel to forward X applications back to your local display. Here is an example:

For this to work, you don’t need to open your local display (using xhost). The reason this works is because the SSH daemon (sshd) on the remote system sets up a secure channel to your computer for X applications. So as not to interfere with any real display numbers, the SSH daemon (by default) uses the display name of localhost:10.0.

This X forwarding feature is off by default with Fedora Core 3, although it was on by default in earlier Red Hat Linux systems. By adding the line ForwardX11 yes (instead of ForwardX11 no) to the local /etc/ssh/ssh_config file, this service is turned on automatically when you use the ssh command (so you don't need the -X option).