Understanding the Structure of an Architecture Adapter

A convenient representation for an architecture adapter is a single component with a set of requirements on it and the boundary interfaces that the requester expects to see. This leaves the details of the mediation between the two architectures to a lower level of design and implementation (see Figure 4-1). 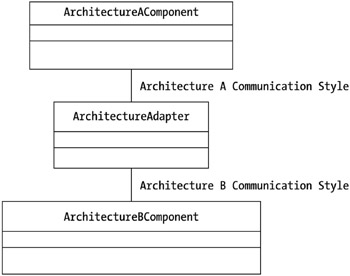 Understanding Components of an Architecture Adapter

Three components make up the structure of a complete solution. A single component, the ArchitectureAdapter , holds the responsibilities of mediating between the two architectures involved. The three components are as follows :

ArchitectureAdapter: The architecture adapter mediates between the two architecture styles inherent in the ArchitectureAComponent and the ArchitectureBComponent . To mediate properly, the adapter must offer a natural interface to both components, regardless of the complexities of mediating the service interaction. The implementation must convert one component's architecture entirely to the other component's architecture and maintain the behavior and expectations of both clients . To do this, data styles must be mapped properly, differences in the behavior of communications must be mapped properly, and even such complexities as converting a rich object hierarchy to a flat component interface must be achieved gracefully. 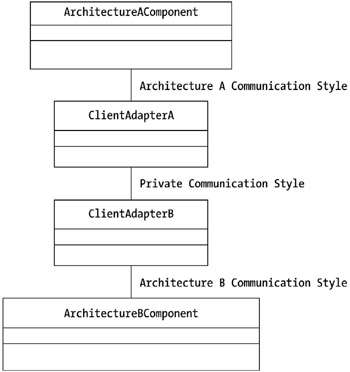 The interesting part of the collaborations between components is in the call style and the data structures passed between components. Instead of using the first structuring from Figure 4-1, I use the second structuring from Figure 4-2 to show a sequence that more closely resembles a Web Service scenario. Figure 4-3 shows the sequence of operations for component A to make a call against component B.