During the last 16 years, we have interviewed thousands of decision makers, including a large number at lost strategic accounts. As we conducted those interviews, certain patterns began to emerge in how customer relationships end. We were able to identify some root causes for those relationships dying. The graph in Figure 6-3 illustrates our conclusions. 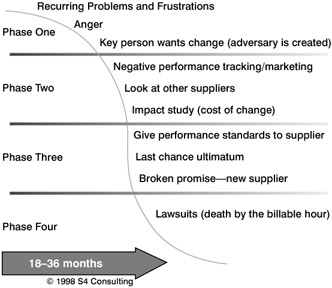 Phase One: Not surprisingly, the strategic account loss cycle starts with recurring problems and customer frustration. In many cases, phase one can result from not covering your bases, not following up, not truly understanding an account's needs, or not seeing that recurring account complaints shield a more serious issue. These issues tend to lead to not once-in-a-while problems (that can appear almost any time in a relationship), but problems that occur increasingly often and can negatively impact some critical account contact's performance measurement. Supplier shipments might be delivered late, leading to line slowdowns or even stoppages. There may be a recurring product-quality problem. Whatever the recurring problem, when an account employee gets docked for the supplier's poor performance, he starts to complain to the supplier, and when that poor performance continues, he (or she) gets angry and very focused, and becomes an adversary. This is a solid reason for setting up supplier performance-measurement systems at the account.

A company we know wanted to assess relationships with critical customers. These assessments included a customer win/loss analysis. We asked this company whether it had lost a major customer in the last five years. After some very loud silence, a supplier executive nodded and said, "But she won't talk to you." It turned out the firm had lost a top-three customer three years before—primarily through the internal efforts of a customer production supervisor, an overlooked user buyer. The supervisor had lost her bonus because the supplier's poor shipping performance caused major blips in line utilization.

We then called the supervisor and asked if she would be willing to answer some questions about the supplier. After a very long pause, she asked one question, "Are they paying you by the hour?" When she was told "yes," she invited us to her office and spoke for six hours. Those six hours were among the study's most valuable to the supplier because she gave detailed information regarding the firm's poor performance, failed processes, and failed systems. The incident was painful for the supplier to relive but it pointed out processes that remained ineffective and that other accounts had been complaining about.

Armed with lack-of-performance metrics, the customer adversary then becomes a VP of negative internal marketing for the supplier, giving regular short marketing presentations as to why the supplier should no longer serve his firm. We once spoke to an executive customer contact who was very unhappy with a supplier. He reached over to his bookcase and pulled down a six-slide, multicolored, graph-filled presentation about the supplier's shortcomings. He gave the 10-minute presentation so professionally that it was clear he had had a great deal of practice. You do not have to be a marketing professional to see this as a very bad sign for the supplier.

Armed with lack-of-performance metrics, the customer adversary then becomes a VP of negative internal marketing for the supplier ...

Over time the adversary, at whatever management level, starts to develop a group that supports his position and is willing to look at other suppliers. If the supplier is a service organization and switchover costs are minimal, the customer might switch suppliers now, during phase two. If supplier switchover requires major changes, such as retooling a manufacturing line, the adversary usually will aim to fund an impact study to compare the cost of change to the cost of continuing to do business with the supplier.

Phase Three: The sorts of momentum an existing supplier relationship can have intrigue us. In most cases, after the adversary completes the impact study, an executive at the customer will turn to her counterpart at the supplier and provide baseline performance standards and demand that the supplier meet them. Usually the poor-performance report shocks the supplier's executives, because internal account managers may have carefully insulated the executives from the firm's poor performance.

In these cases, supplier executives tend to act in depressingly similar fashions. They go to the areas that are underperforming—shipping, say—and demand that they improve performance if they want to keep their jobs. Performance will minimally improve, but if the problem has been recurring, there is almost always some process or system out of alignment with the customer's expectations. Saber rattling does not redesign systems or processes, so the problem persists. This usually leads to the customer flinging an ultimatum at the supplier, which leads to another flare-up of executive rhetoric, and then to a broken promise and new supplier.

Phase Four: Although this phase on the graph seems to be part of a linear progression, phase four of the loss cycle only happens in about 1 out of every 30 customer losses. In those cases liability issues are involved and the customer hurls not just demands but lawsuits. In most cases the supplier hurls back countersuits and there can be a lengthy legal battle, in which the winners are sometimes only the lawyers. Such a suit can potentially kill the supplier. It is one thing to lose a large customer's revenue stream; it is quite another to lose that and a treble-damage liability suit and have your firm's margin wiped out for years.

The New Successful Large Account Management: Maintaining and Growing Your Most Important Assets -- Your Customers