For example suppose the member function display( ) is to act on the following binary tree. Recall that the pointer root of the bst object points to the binode whose data value is 50. 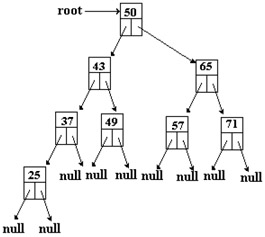 Notice in the body of the function traverse( ), that when a node of the tree was reached, the left branch was traversed first and then the node's data was displayed and finally the right branch was traversed. All of this was done in a recursive manner. To see how these functions work, see example: bst2.cpp and the header bst2h. This example uses Date objects from the header: date.h.

Now we need to consider how to delete a node using the member function delete_node(). In considering this problem we can see that there are three cases. The first type of node to be considered is a node with no children (it is a leaf) like the node with data value 8 as in following graphic: 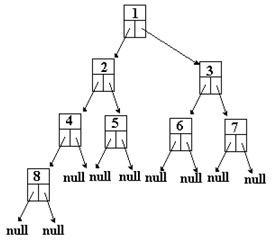 Suppose that we wanted to delete a node with the data value A. To begin the process we must first determine if the node exists. This will be done with the member function search( ) similar to the one used in bst.h above. The only modification will be the addition of a fourth argument parent that permits access to the parent of the node if the node is found. The function is the following:

In the first case, the node should be deleted and its parent's pointer pointing to it should be set to NULL. In the second case, the program must traverse to the child first and process it before the parent can be deleted. In the third case both children must be handled in the same way. The third case is the most difficult.

To see how a node could be deleted from a BST see example: bst3.cpp and the header bst3.h. This example uses Date objects from the header: date.h.

For the final example in this lecture, I have created a menued program that permits the testing of each of the individual member functions of the class bst. In addition it permits the input of the data from a disk file into the BST and then it sends the data to the binary file as the data is removed from the BST. For this example see bst4.cpp and the headers: bst4.h and date.h.