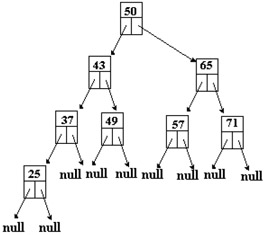 As an ADT the binary search tree (BST) must have the following Basic Operations:

The discussion of this section shall consider a class bst that has only the first five of these operations. The remaining will be discussed in the next section.

As with the linked lists discussed before, a bst object has as its only data member a pointer. In this case, the pointer points to an object of the binode class. This pointer will be called the root since it will be pointing to the top of the binary tree that is called the root of the tree. The definition of objects of bst will set root to point to NULL at definition time. The constructor therefore contains a statement like the following:

As the first binode is created, root will contain the address of this binode.

The first step is to determine if a binode with the value item exists. This can be done with the following code:

In the above code a Boolean flag found is set to false to begin the search. It will be set to true if the value item is found in the tree. The pointer ptr is used to move down the tree. The action will go left if the value item is less than the data encountered at the binode being checked and it will go right if the value item is larger than the data at the binode. However should one of the binodes along the way have a data equal to item, then found is set to true and the loop exits. Should there be no match, then ptr will eventually point to NULL and the loop will exit in this case as well. In this case, since found was set to false to begin with, if there is no match of a data with value item during this search, then found will exit with the value of false

As the for( ) loop is exited, found will be either true or false. If it has value true, then a binode with the value item already exists and the user should be notified. If found is false, then no binode exists in the tree with data equal to item so a binode should be defined and attached. These two cases could be handled as in the following:

Notice in the else part in the code above (when found is false and therefore no binode with value item exists), the new binode is dynamically defined. The remaining code considers three cases:

Notice that the constructor used for the binode sets both of the pointers: left and right of the new binode to NULL. If this process was followed by loading into a BST from a data file, this process could take a long time (see example in next unit).

Now that we have considered the creation of a binary search tree with binodes that were defined dynamically, we need to consider what should happen when the binary search tree goes out of scope. The memory for each dynamically defined binode must be recovered and returned to the heap. That is we must now define a destructor for the class bst that deletes each of the binodes.

The approach to these deletions is iterative and it is not very efficient because for the deletion of each node, the process begins with root. As a result, if there was a large number of binodes in the tree, this process of deletion could be a very long and involved process beginning with the root, down a branch of the tree to a leaf, delete the leaf, reset one of the parent's pointers and then delete the binode. As you can see, a large binary search tree would take some time to not only create but to destroy as well.

Notice how the following code would delete each node:

Notice that in the above code, the while( ) loop continues until the bst object is empty. That is until root == NULL.

As discussed above, the code moves down a branch of the tree until a leaf is reached. At this point, the parent for that leaf has its pointer to the leaf set to NULL and the leaf node is deleted.

The final member function to be considered in this section is search( ). This function is in fact the reason for binary search trees. That is our goal is to search the tree data for a value but in an efficient manner. The process begins like that in the insert( ) function above. The code starts at the root and works it way down the tree. There are three cases depending on the value item as compared to the data of the respective binode. The code goes left if the data of the binode is greater than the value item, it goes right if item is greater and if they are equal the Boolean found is set to true.

The header of the function search( ) is:

Notice the two reference operators in the signature. The one for item is only used to reduce the function's load but the reference operator for location is used to also return the address of the binode that has the value item. Using this address, the program could change the value of the data at that binode. A new search( ) function will be used in the next section. It adds an additional argument parent that will enable the deletion of individual nodes in the BST.

Putting all of these ideas together would yield the following example see bst.cpp and bst.h. This example uses Date objects from the header: date.h.

Interprocess Communications in Linux: The Nooks and Crannies
Inside Network Security Assessment: Guarding Your IT Infrastructure
Image Processing with LabVIEW and IMAQ Vision
Documenting Software Architectures: Views and Beyond
Data Structures and Algorithms in Java
What is Lean Six Sigma
flylib.com © 2008-2017.
If you may any questions please contact us: flylib@qtcs.net
Privacy policy
This website uses cookies. Click here to find out more.
Accept cookies