Today, to aid in the development of the 5-phases, CASE tools (i.e. Computer-aided Software Engineering tools) are used. In researching for these lectures, I found the following definition of CASE tools.

The following graphic attempts to illustrate how traditional programming compares to using CASE tools. This graphic is from the Galin book p 301. 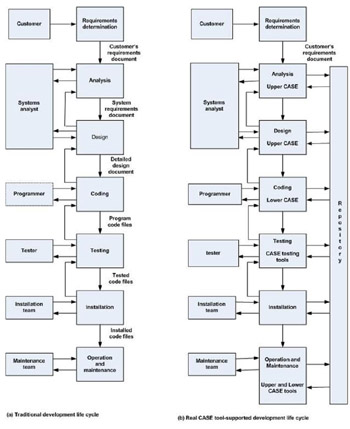 Note:  In the graphic above, Repository means the collection of the documentation from all phases of the software development.

Note:  In the graphic above, notice the different categories of the development team. Your goal as a future member of a software development team is to determine which of these jobs you are the best at and which you want to work on.

The above discussion is a modification of the topic from the following book which I highly recommend that you read:

Software Configuration Management
C++ How to Program (5th Edition)
Practical Intrusion Analysis: Prevention and Detection for the Twenty-First Century: Prevention and Detection for the Twenty-First Century
Special Edition Using Crystal Reports 10
Persuasive Technology: Using Computers to Change What We Think and Do (Interactive Technologies)
What is Lean Six Sigma
flylib.com © 2008-2017.
If you may any questions please contact us: flylib@qtcs.net
Privacy policy
This website uses cookies. Click here to find out more.
Accept cookies