Combining the knowledge gained from Chapters 2 and 3, we now have a fairly complete grasp of LDAP basics. Chapter 2 treated LDAP from the protocol point of view. Chapter 3 showed the four models that provide the basis of LDAP. We learned that the LDAP database contains a large number of objects stored in the form of entries. Each object is constructed of attributes. Each attribute has a name and one or more values. The objects are organized in the database in a hierarchical structure that builds a tree, much like a directory on a file system. LDAP offers a number of functions to facilitate access to these objects. There are also control structures to mediate who can access and manipulate the data.

In this chapter, we take a more practical approach. We revisit the search function and explain how to construct filters with the help of some examples. We then have a brief look at the directory schema and provide some practical examples. We also learn how the theoretical objectIDs and matching rules fit into the definitions that are in the configuration files. We learn more about the LDIF format and understand its importance for importing a directory. Finally, as promised in Chapter 2, we will have a closer look at LDAP URLs, further examine the differences between LDAPv2 and LDAPv3, and conclude with a short discussion of what is going on with the development of LDAP. I will also describe the workgroups active at the time of this writing.

In the preceding chapters, we have seen the search function in action a number of times. Before initiating a search, you specify several parameters. Let us take a look at an example. Look at Exhibit 1. We want to know name of the users working in Europe. First, we define the search base, i.e., the location in the tree from which the search should begin. 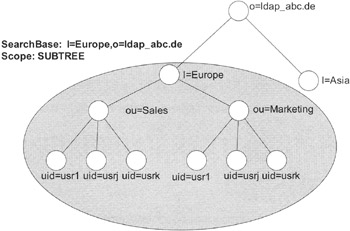 Next, we have to specify how deeply we wish to search. This specifies the scope parameter, as explained in Chapter 3. The three possibilities are:

In Exhibit 1, it is clear that "subtree" means the whole subtree, beginning at the search base. Exhibit 2 shows the "onelevel" search scope. Note that the search base itself is excluded from the search. You can verify this by searching with the filter: 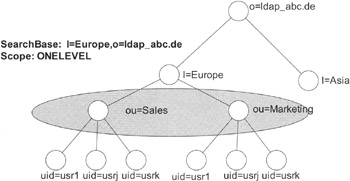 Note that the exact name of the constant used for the scope depends on the API you are using. In the C API, the constants are called:

To complete the picture, see Exhibit 3, which shows an example of "search" with the scope set to "base," i.e., the search is executed only in the immediate search base. 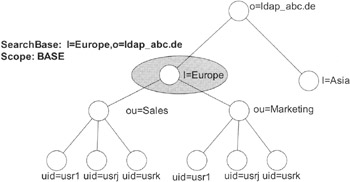 Exhibit 3: Example of Search, Scope Set to BASE

The most important thing in the search is the filter. The filter defines what you want to know, perhaps which objects belong to a certain objectclass, the list of persons with surnames beginning with "A," and so on.

Now, finally, we will have a closer look at how to construct a query filter. If you would like more information about filters, you can look at RFC 2254, "The String Representation of LDAP Search Filters." This RFC supersedes RFC 1960, "A String Representation of LDAP Search Filters" describing LDAP (v2) filters. The difference between the two RFCs is that LDAP (v3) adds the extended match filter. In LDAP (v2) you could not search in the distinguished name. The extensible match makes this possible and allows the user to define different behaviors in comparisons. We will discuss this aspect in greater detail later.

Exhibit 4 lists the filter definitions that can be used in an LDAP search. The following sections give a brief example of each filter listed in Exhibit 4.

This is the simplest form of the filter. It tests for exact equality between the string searched and the attribute value.

Evaluates to "true" if the attribute value contains the query string:

This is a simple filter type, testing only for the presence of the requested attribute. For example,

reports entries that have a value for the attribute "fax."

The approxMatch filter is a question of implementation. It returns true if the attribute values "sounds like" the search string. This is clearly dependent on the language used. For example,

returns true if the attribute value of sn "sounds like" Parker, the meaning of which depends on the particular implementation.

Boolean Operators: And, Or, Not

Finally, we have the Boolean operators. These operators are used in combination with all of the operators described in this section so far. The notation, however, is somewhat cumbersome and not recommended for the end user. The syntax used is called "prefix notation." Those who recall the postfix notation of the first pocket calculators (namely Hewlett-Packard) will remember it. With prefix notation, the operator precedes the operands.

The following examples illustrate the use of the Boolean operators alone and in combination:

Using these Boolean operators, it is possible to build whatever logical construction you want.

With this command, the search would include all entries containing the distinct name "San Francisco" in the location field.

However, this filter can do much more. The user can also specify which matching rule the query should use. For example, suppose you wanted to use the caseExactString match to look up a common name. The common name (cn) normally uses caseIgnoreString, so Carter and carter and CARTER are all the same thing. You could specify

to distinguish "Carter" from the other possibilities.

In Backus Naur form (BNF) (see Chapter 3, Exhibit 4), the syntax definition for the extensible match statement would be as follows::

The square brackets indicate that the enclosed expression is optional. The logical operator "|" means OR. If you omit the attribute name, you have to express the matching rule your query will use.

To finish this section, let us review several examples copied from RFC 2254, "The String Representation of LDAP Search Filters":

The filter mechanism itself uses a handful of characters for its own purpose. The "*" character is used in substring matches; left and right parentheses are used for grouping; the backslash character is used for "escaping" characters; and the NULL string is reserved. If you need to use these characters as part of the search value, they have to be "escaped" using their hexadecimal values. Exhibit 5 lists the values and shows the associated escape sequences.

Exhibit 5: Characters with Their ASCII Values and Escape Sequences

The following are other useful examples from RFC 2254: