TCP/IP is the third of the three major components supporting communications within a diversity of transport media; however, the most popular data communications protocol remains Ethernet. Support here is evolving with increasing bandwidth to support Gigabit Ethernet standards, sophisticated participation within enterprise networks with quality of service (QoS) and routing participation. However, it should be noted that one of the limiting factors of file I/O within a TCP/IP network environment is the processing of the TCP layers for communications between client and server (for example, NAS device) elements. Note that this should reflect the TCP Off-load Engine (TOE) technology and other initatives such as InfiniBand that are evolving to optimize this latency.

To understand the relationships of network software and NAS we must describe the basic concepts behind the transport software that support the transmission of data throughout a network. As we discussed in Part II, the blueprint for open networks is the OSI layers of network processing. Parts of the OSI layers have been discussed in the previous sections of this chapter in explaining how the network devices work within LANs. We left that discussion within the transport layer, or layer 4.

We will begin the software discussion at the network layer and move up through the additional layers of the OSI model, discussing transport layer, session layer, presentation layer, and application layer. Most of our time will be spent on network, transport, and session layers due to their contribution to TCP/IP processing and their effect on I/O processing within the NAS model. However, it is important that we also mention the session and presentation layers and their effect in transporting the file level protocols, such as HTTP and FTP, and the subsequent interchange between applications and presentation layers.

The OSI model represents all the required processing for making a connection within a network as well as the necessary connections to applications that occur within a client/server computing model. Figure 12-9 shows layer 3, the network layer, and the remaining layers of the model: transport, session, presentation, and application. Each represents an important aspect of processing applications within the client/server model. More importantly, they represent a focused set of activities as they relate to NAS devices, along with their integration and interchange with the NAS micro-kernel . 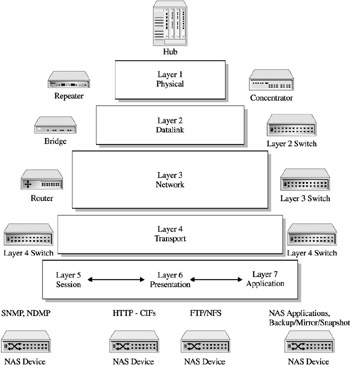 An Overview of TCP/IP Processing

We begin the following overview by taking a look at how TCP and IP work to encapsulate and transport both data and messages throughout a network. TCP/IP supports data transmissions and functions within a switched packet network. This means that IP provides the packets and associated delivery information to the network. As discussed in the network device overviews, many of the switch and router devices derive their function from IP addresses.

Although we have already referenced IP in association with TCP/IP, the function of the Internet Protocol (IP) component is critically important to the transmission of data. IP functions as the envelope for application communications within a network. To that end, it provides an address, consisting of both network and computer addresses, for delivery within the Internet networking topologies. Using the IP address provides a means of locating any computer within the universe of the Internet and local networks that is designated to receive the IP packet.

All computers running TCP/IP software have IP addresses. These are assigned when the TCP/IP software is installed and initialized . The IP assignments become part of the computers network name and specific address within the network. The addresses, being a collection of numbers , rely on processing by the network devices to evaluate the IP address and route the IP packet to the appropriate network, and subsequently to the specific computer.

NAS functions on a TCP/IP communications basis. Therefore, NAS devices run TCP/IP and consequently play by the same rules as other computers that are addressed through IP address schemes. There are several considerations to this, howeverthe most important being the placement of NAS within the network segments due to its IP addressability and transmission of I/O file content within the IP packet.

The considerations are the placement and usage of the layer 3 and layer 4 network devices which can have a positive or negative effect on an NAS device. Well look at specific performance conditions in Part VI, however its important to understand these devices as they operate with an NAS device. Figure 12-10 further illustrates our example network with NAS being fronted with both the layer 4 device, supporting UNIX applications servers, and the layer 5 device, supporting e-mail and web servers. The layer 4 devices examine the IP packet as it comes into the network segment, and then route it according to the routing tables it maintains. This allows some requests to be transmitted directly to the NAS device for I/O file processing without them being redirected from the server. Such well-performed tasks illustrate the real value of the NAS solution. Some requests, however, are more generic and are sent to the application server where theyre redirected to the NAS device. This is a function of the application and its related request. 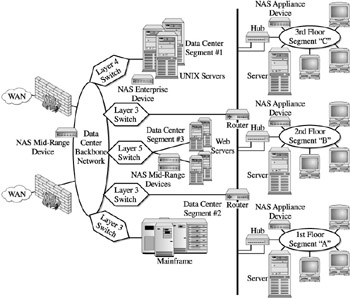 Also a function of the NAS device to support the application server I/O requests, some degree of network efficiency can be derived by processing I/O requests directly through to the NAS device. However, layer 4 network devices only route the IP address and dont provide any additional intelligence as to its routing processes.

Layer 5 network devices may be more appropriate when trying to mediate complex data access requirements regarding application servers supported by NAS devices. One way this is done is through load balancing, where layer 5 network devices working at the session and presentation level can derive information about its network traffic and route accordingly . Therefore, in some instances, NAS devices can participate in load balancing by routing all explicit or some masked inexplicit I/O file requests directly to the NAS server.

A client request for data uses TCP to encapsulate and break the request into packets and then passes them to the IP functions. IP provides addressing information in the form of headers regarding the destination of the packets. Another important distinction of the TCP processing is the error checking it provides, especially for datacentric requests.

The effect of the IP and subsequent TCP processing places an additional workload on both the sending and receiving computer. In the case of a server, the overhead can be extremely high given the amount of TCP/IP processing required with multiuser access. Given that the majority of overhead occurs within the TCP and IP software running on a particular server, this can become critical when considering the case for NAS.

Our previous example of a sample network illustrates NAS I/O operations as they relate to connectivity. Figure 12-8 shows how the network operates, using sample workloads that take place in the user departments as well as in the data center. The Accounting and Sales departments are good examples of NAS appliance deployment, while the more heavyweight workloads in the data center depict mid-range and enterprise NAS solutions.

Operational aspects of Figure 12-8 include the following:

The previous sample network also provided a basis to illustrate NAS placement as it relates to I/O workloads. Figure 12-11 shows how the I/O workloads operate within their specific placements. Our sample workloads form an important aspect to NAS placement decisions as they relate to user departments or placement within the data center. The accounting and sales departments are good examples of simple file processing (Sfp) using NAS appliances, while the more heavyweight workloads in the data center provide examples of both complex file processing (Cfp) and network file processing (Qfp) using a depiction of the mid-range and enterprise NAS solutions. 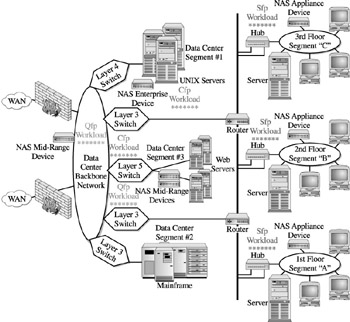 The workload aspects of Figure 12-11 include the following: