An Operational Overview of SAN

SANs are constructed with many new components from the storage network. The foundation is the FC switch, which provides the physical connection that allows 'any-to-any' communications within the fabric. SAN switches provide the hardware and software foundations needed to facilitate the network-the hardware itself being composed of ports that permit the connection of FC-based devices, such as storage arrays and servers.

Finally, storage devices used with the fabric must be FC-compliant devices (that is, they must speak FC to communicate with the network). As with Ethernet networks, early users of SANs required the use of bridges and routers to allow traditional storage devices (such as tape drives ) to participate within the fabric. These devices translated FC protocols to SCSI bus level protocols, basically breaking frames down into bus segments so a SCSI-level device (such as a tape drive) could be connected to the FC fabric network.

As more paths to data become available, so does the theoretical limit of users accessing that data. SANs have the capability to increase the number of paths to the data by way of the number of actual I/O paths, or through the actual transfer of data to the application and, subsequently, the user . If we add up the FC's capability to operate at gigabit speeds, the SANs' capacity to support a large user base becomes apparent. An example is depicted in Figure 4-9. 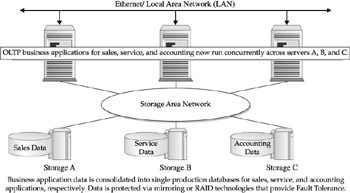 The best example for dealing with size is data warehouses. As described in Chapter 1, these datacentric applications have extreme data storage requirements in terms of the number of bytes of online storage. What makes these applications particularly difficult to configure is the complexity involved in processing the data and the movement of large subsets of data to source and process complex transactions. Figure 4-10 shows the use of SANs to enhance a particular data warehouse application in terms of the size of databases involved. This also pertains to SANs data movement activities, which are accomplished while maintaining a service level. 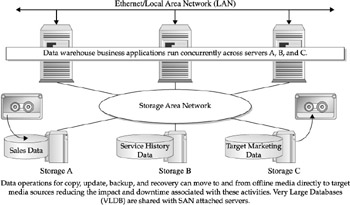