The first stage of SAN evolution was the development of Fibre Channel (FC)-based storage devices used with direct connections, or a point-to-point configuration. These storage devices used FC addressing to process requests to and from the connected devices, presumably a storage array attached to a server. Although this enhanced the bandwidth of transferred data, FC devices had the capacity to handle 100 MBps, and were limited to the two devices within the point-to-point configuration. Although this worked well and used the existing device communications of SCSI commands, it proved restrictive in regards to the growth of large storage infrastructures .

As shown in Figure 4-7, the second stage employed arbitrated loop architectures, letting more devices participate through the use of FC Hubs. This allowed storage devices to continue operating within an arbitration scheme to share bandwidth, but allowed additional devices to participate within a network fashion. Although this worked better than point-to-point solutions, the overhead necessary to mediate the Hub, adding additional devices within the loops required sharing the bandwidth and thus sacrificed much of the high-speed efficiencies gained with FC devices. 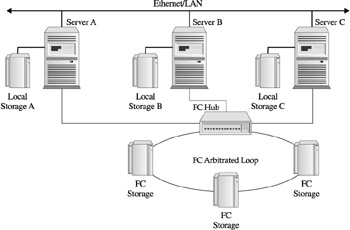 The most current state of SAN configuration is the switched fabric network, as shown in Figure 4-8. This configuration allows any-to-any device communications to take place within the network. Each device participating within the network gets full use of 100 MBps bandwidth without sacrificing its performance as other devices are added. Minimal overhead to moving FC frames through the network is accomplished through an FC network switch. 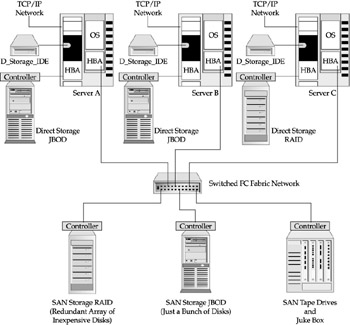 Switched Network allowed a significant increase in the number of devices connected with the network. This allowed for servers and storage devices to be connected in a network fashion and communicate bidirectionally in an any-to-any manner.