Table 11-1 shows the minimum and maximum virtual size of the system cache, along with the start and end addresses. If the system calculates a cache virtual size that is greater than 512 MB, the cache is assigned virtual memory from an additional address range known as cache extra memory.

Table 11-2 lists the system variables that contain the virtual size and address of the system cache.

As mentioned earlier, one of the key differences in the design of the Windows 2000 cache manager from that of other operating systems is the delegation of physical memory management to the global memory manager. Because of this, the existing code that handles working set expansion and trimming as well as manages the modified and standby list is also used to control the size of the system cache, dynamically balancing demands for physical memory between processes and the operating system.

Most utilities that claim to display the size of the system cache (such as Task Manager, Pview, Pstat, Pmon, Perfmtr, and so on) in fact display the total system working set size, not just the cache size. The reason for this inaccuracy is that the performance counter Memory: Cache Bytes (see Table 11-3) returns the total system working set size, which includes the system cache, paged pool, pageable system code, and system mapped views, even though the name and explanatory text imply that it represents just the cache size. For example, if you start Task Manager (by pressing Ctrl+Shift+Esc) and click the Performance tab, the field named System Cache is actually the system working set size, as you can see in Figure 11-4. 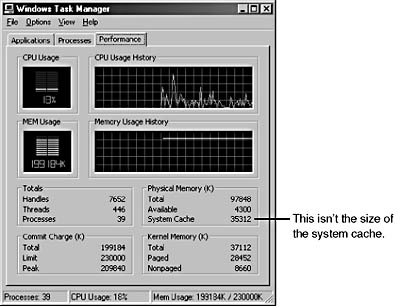 The !filecache debugger command dumps information about the physical memory the cache is using, including the names of files mapped into virtual address control blocks (VACBs), where applicable, as you can see in the following output. (File system drivers cache metadata by using unnamed file streams.)