Because the Windows 2000 system cache manager caches data on a virtual basis, it is given a region of system virtual address spaces to manage (instead of a region of physical memory). The cache manager then divides each address space region into 256-KB slots called views, as shown in Figure 11-2. (For a detailed description of the layout of system space, see Chapter 7.) 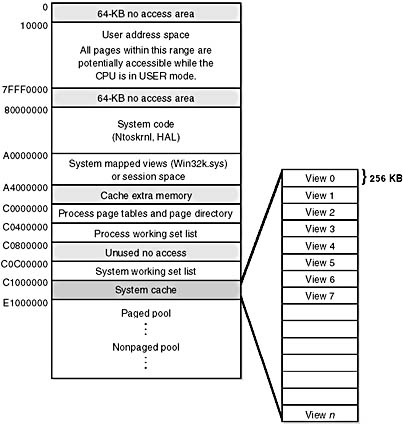 At a file's first I/O (read or write) operation, the cache manager maps a 256-KB view of the 256-KB-aligned region of the file that contains the requested data into a free slot in the system cache address space. For example, if 10 bytes starting at an offset of 300,000 bytes were read into a file, the view that would be mapped would begin at offset 262144 (the second 256-KB-aligned region of the file) and extend for 256 KB.

The cache manager maps views of files into slots in the cache's address space on a round-robin basis, mapping the first requested view into the first 256-KB slot, the second view into the second 256-KB slot, and so forth, as shown in Figure 11-3. In this example, File B was mapped first, File A second, and File C third, so File B's mapped chunk occupies the first slot in the cache. Notice that only the first 256-KB portion of File B has been mapped, which is due to the fact that only part of the file has been accessed and that although File C is only 100 KB (and thus smaller than one of the views in the system cache), it requires its own 256-KB slot in the cache. 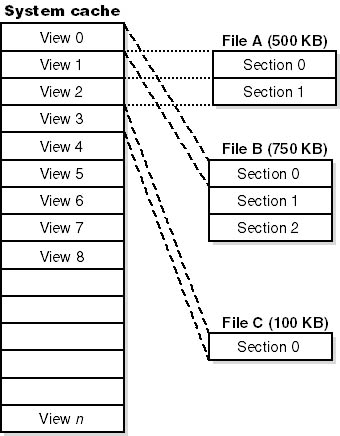 The cache manager guarantees that a view is mapped only as long as it's active. A view is marked active, however, only during a read or write operation to or from the file. Unless a process opens a file by specifying the FILE_FLAG_RANDOM_ACCESS flag in the call to CreateFile, the cache manager unmaps inactive views of a file as it maps new views for the file. Pages for unmapped views are sent to the standby or modified lists (depending on whether they have been changed), and because the memory manager exports a special interface for the cache manager, the cache manager can direct the pages to be placed at the end or front of these lists. Pages that correspond to views of files opened with the FILE_FLAG_SEQUENTIAL_SCAN flag are moved to the front of the lists, whereas all others are moved to the end. This scheme encourages the reuse of pages belonging to sequentially accessed files and specifically prevents a large file copy operation from affecting more than a small part of physical memory.

If the cache manager needs to map a view of a file and there are no more free slots in the cache, it will unmap the least recently mapped inactive view and use that slot. If no views are available, an I/O error is returned, indicating that insufficient system resources are available to perform the operation. Given that views are marked active only during a read or write operation, however, this scenario is extremely unlikely because thousands of files would have to be accessed simultaneously for this situation to occur.